The Folly of Princes 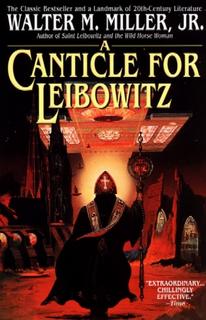 We discussed Walter M Miller Jr's A Canticle for Leibowitz (full-text at link) on Friday, September 30 at Kelowna's Bean Scene coffee house. The book is actually more an anthology than a novel. It collects three stories of consecutive eras in the American Southwest. Canticle is of a rarely mined genre in American literature, that of a post-apocalyptic future, a theme more often mined in American film or—for obvious reasons—Japanese literature, film, and graphic novels.

In recounting the stories of these future eras—Fiat Lux, Fiat Homo, and Fiat Voluntuas Tua—Miller naturally reveals much about the era in which he wrote his work and about himself. 1957: The Cold War is nearing the deep freeze of the early 1960's. The term Mutually Assured Destruction is coined to rationalize a massive nuclear arms buildup capable of eradicating humanity from the planet along with most life. In Canticle the terrible logic of MAD can no longer be sustained. Weapons that "contained the very fires of Hell" stood at the ready:

"...the princes, putting the words of their wise men to naught, thought each to himself, If I but strike quickly enough, and in secret, I shall destroy those others in their sleep, and there will be none to fight back; the Earth shall be mine.

"Such was the folly of princes, and there followed the Flame Deluge"

Along with the folly of princes, I found the complicit scientists to be culpable, but others in the group didn't see it that way. Specifically, passages such as the one below suggest Miller's explanation for the role of scientists in the nuclear build-up, but falls far short of forgiveness:

[Thon Thaddeo, a scholar]: "I can’t fight the prince who makes my work possible–no matter what I think of his policies or his politics. I appear to support him, superficially, or at least to overlook him–for the sake of the collegium. If he extends his lands, the collegium may incidentally profit. If the collegium prospers, mankind will profit from our work.”

[Dom Paulo, a cleric]: “The ones who survive, perhaps.”

The book centers around an abbey located near the site of a 20th century nuclear test facility in centuries following the Flame Deluge. The abbey has been charged by its founder, Isaac Leibowitz, a 20th century engineer, to hoard and stockpile documents from before the Deluge, a task that was especially difficult to achieve for two reasons: the thorough destruction of these documents caused directly by nuclear war, and the subsequent renunciation of science in a movement termed the Age of Simplification. This aspect of the book has prompted comparisons with Bradbury's Fahrenheit 451. 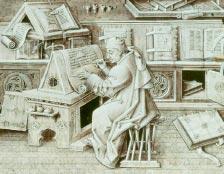 In the first era, a novice of the abbey, Brother Francis, uncovers a cache of documents from a fallout shelter, including some penned by the blessed Leibowitz himself, containing inscrutable messages like, "Pound pastrami, [...] can kraut, six bagels,–bring home for Emma." Brother Francis undertakes the creation of an illuminated manuscript reproducing a circuit design blueprint by Leibowitz. He spends years on the task, but doesn't mind:

"There was a tedium of repeated days and repeated seasons; then there were aches and pains, finally Extreme Unction, and a moment of blackness at the end–or at the beginning, rather. For then the small shivering soul who had endured the tedium, endured it badly or well, would find itself in a place of light, find itself absorbed in the burning gaze of infinitely compassionate eyes as it stood before the Just One. And then the King would say: “Come,” or the King would say: “Go,” and only for that moment had the tedium of years existed. It would be hard to believe differently during such an age as Francis
knew."

I interpreted this passage as implying that in an age such as ours, such beliefs would be unsupported. Again, some in the group disagreed: those who are certain of life beyond the blackness, I presume.

The tedium of our corporeal lives is echoed in the cyclic apocalypses depicted in the novel: "It never was any better. It never will be any better. It will only be richer or poorer, sadder but not wiser, until the very last day."

The story is filled with Latin and scripture, reflecting Miller's own adoption of Catolicism as an adult. He meditates on nuclear build-up, man's arrogance and persistence, anti-intellectualism, the afterlife, and euthanasia in the lead-up to the novel's climax. The destruction of the Leibowitz abbey is reminiscent of that of a Benedictine monastery at Monte Cassino in World War II. Miller was involved in the bombing run and was deeply affected by this violence perpetrated against the Church.

As the book ends, the survivors of another holocaust leave behind a ruined planet, inherited by doomed sharks in the depths. Optimistic?--Man survives yet again. But the image isn't exactly heartwarming.

Next up: Salinger's A Catcher in the Rye.