In the interest of supporting the use of source documents when forming opinions on current events, here follows a link to an extended excerpt of the National Intelligence Estimate report titled "Trends in Global Terrorism: Implications for the United States."

I have read the excerpt and seen the comic soundbites of Bush II's press briefing on the subject. I also read the transcript of Bush II's Presidential Radio Address and I have to say I agree with some of his comments. See what you think, and try to forget for a moment that it is Bush II's hard head from which these words emanated:

"The National Intelligence Estimate confirms that we are up against a determined and capable enemy. The NIE lists four underlying factors that are fueling the extremist movement: first, long-standing grievances such as corruption, injustice, and a fear of Western domination; second, the jihad in Iraq; third, the slow pace of reform in Muslim nations; and fourth, pervasive anti-Americanism. It concludes that terrorists are exploiting all these factors to further their movement.

Some in Washington have selectively quoted from this document to make the case that by fighting the terrorists in Iraq, we are making our people less secure here at home. This argument buys into the enemy's propaganda that the terrorists attack us because we are provoking them."

Freedom. Democracy. Truth. Self-determination. Free markets. Justice. That is what America purports to stand for.

But from the perspective of anyone outside the deluded administration or blinkered rural electorate, we instead see: Lies. Occupation. Martial law. No due process. No-bid contracts. Theft. Poverty. Despair.

Hard to cultivate allies from such a quagmire. 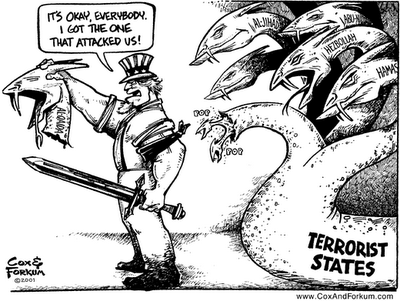 Death of an ad campaign

CBC reported today that NPR and CNN are refusing to air ads promoting the film Death of a President (official site and IMDB entry). The film is a documentary-style account of the fictional assassination of Bush II in 2007.

The indignant co-founder of the film's distributor, Newmarket Films' Chris Ball, bitched to the LA Times: "To refuse to accept ads for a movie is tantamount to saying it shouldn't be seen, and this runs counter to everything we are supposed to believe in a free society." 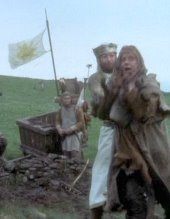 Objecting to participate in the promotion of your movie undermines free society? Puh-leeze. I didn't realize that a publicly funded radio service has a duty to advertise for anybody. And for a corporate media outlet to choose its sponsors typifies what is meant by a free society. He reminds me of Dennis the Peasant hurling abuse at King Arthur, then wailing, "Help! Help! I'm being repressed!" I would not be surprised if Ball's indignation was in fact calculated to generate publicity from all news outlets, and thereby promote his movie for the cost of a conversation with a reporter.

If NPR and CNN refuse to report the film's opening and the controversy surrounding it, that is quite another matter. As news outlets, they certainly have a duty to reportage. But they are not bound to shill for you.