Obama: US "Not At War With Islam" 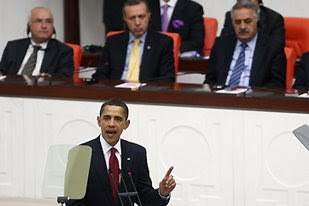 In a speech filled with the right ideas, Obama enunciated a new approach to foreign relations that is long overdue. Speaking at the Turkish Grand National Assembly, Obama remarked:

"The United States is not, and will never be, at war with Islam. (Applause.) In fact, our partnership with the Muslim world is critical not just in rolling back the violent ideologies that people of all faiths reject, but also to strengthen opportunity for all its people."

Such a sentiment unites the US and the Muslim world in resisting the perniciousness of extremism. This unity of purpose, not a threat of recrimination, is what is needed for nations harboring terrorism to feel invested in its eradication.

"I also want to be clear that America's relationship with the Muslim community, the Muslim world, cannot, and will not, just be based upon opposition to terrorism. We seek broader engagement based on mutual interest and mutual respect. We will listen carefully, we will bridge misunderstandings, and we will seek common ground. We will be respectful, even when we do not agree."

Obama's pledge to undertake a multilateral approach is perhaps a little less noble than it sounds. In Robert Kagan's book, Of Paradise and Power, the author contends that Europe's inclination toward multilaterality is a consequence not of moral superiority but of weakness. If individual European nations were capable of projecting power unilaterally, they would. Bush II should have realized that the age of unchallenged US interventionism has passed. Its adversaries are strengthening and it now stands precariously at the brink of fiscal collapse.

Obama's approach is certainly more sanguine than Bush II's. While it is difficult to know its true source, this much is true: the era when the primacy of the US's interests in dictating international relations is no longer. The multipolar landscape that replaces it is riskier and less certain to the US and its allies, but even its allies may benefit from this more cooperative approach.

"We will convey our deep appreciation for the Islamic faith, which has done so much over the centuries to shape the world -- including in my own country. The United States has been enriched by Muslim Americans. Many other Americans have Muslims in their families or have lived in a Muslim-majority country -- I know, because I am one of them."

This personal identification with Muslims is politically courageous of Obama, and sure to be appreciated in the Muslim world. It reminds me of something Andrew Sullivan wrote in the Atlantic in December 2007:

[Imagine that] "Barack Hussein Obama -- is the new face of America. In one simple image, America's soft power has been ratcheted up not a notch, but a logarithm. A brown-skinned man whose father was an African, who grew up in Indonesia and Hawaii, who attended a majority-Muslim school as a boy, is now the alleged enemy. If you want the crudest but most effective weapon against the demonization of America that fuels Islamist ideology, Obama's face gets close. It proves them wrong about what America is in ways no words can.

"To be black and white, to have belonged to a non-religious home and a Christian church, to have attended a majority-Muslim school in Indonesia and a black church in Chicago, to be more than one thing and sometimes not fully anything -- this is an increasingly common experience for Americans, including many racial minorities. Obama expresses such a conflicted but resilient identity before he even utters a word. And this complexity, with its internal tensions, contradictions, and moods may increasingly be the main thing that Americans have in common."

Lastly, Obama carefully avoided passing judgment on Turkey's genocide against Armenians during World War I, and again exposed the vulnerability of the US's past posturing, noting that the US "still struggles with the legacy of our past treatment of Native Americans." Obama's frank disclosure of America's vulnerability communicates volumes about Obama's personal strength, pragmatism, and constructiveness.

Hype Over Risk of CT

In a study publicized today, alarms are being sounded over the risks of repeated imaging with CT scans. Draw such a conclusion cautiously. I read the actual medical journal article rather than the news story to get some perspective.

Dr Aaron Sodickson and his colleagues at Harvard published their study in the April 2009 issue of the journal Radiology. The study concludes that patients undergoing CT scans have an increase in the risk of cancer as a consequence. It also concludes that the more scans you undergo, the greater your risk. Lastly, it concludes that the lifetime attributable risk, the risk of the CT inducing a cancer, is up to 12%.

My concerns about the way this study is being presented relate to its methodology. The investigators never actually study how many cancers occur in a population undergoing repeated CT versus a population not undergoing CT. They did analyze a cohort of patients: those undergoing CT scan at their hospital over the course of one year, 2007. Their analysis was limited to determining how many lifetime CT scans these patients underwent and for what reason.

Sodickson et al did not determine the risk of developing cancer from actual cancer cases in this cohort. Instead they modeled how many cancers they would expect based on a mathematical model called the Biological Effects of Ionizing Radiation VII methodology to estimate these risks. I decided to read much of that document too, to get a look at their methodology.

A report was prepared by the Board on Radiation Effects Research of the US National Research Council titled Health Risks from Exposure to Low Levels of Ionizing Radiation: BEIR VII Phase 2. The Council extrapolated data from Hiroshima and Nagasaki atomic bomb survivors, from studies of cancer patients receiving therapeutic doses of targeted radiation, and from studies of occupational and environmental exposures. The consortium also analyzes the effect of diagnostic radiation, tests that use x-rays, the only class of radiation exposure that applies to Sodickson's CT study as far as I'm concerned. For example:

"A cohort study of 64,172 tuberculosis patients was carried out in Canada to assess the risk of cancer associated with multiple fluoroscopies (Miller and others 1989). In this cohort, 25,007 patients were exposed to highly fractionated radiation from repeated fluoroscopic examinations used to monitor lung collapse from pneumothorax treatment. Howe (1995) studied the risk of lung cancer in this cohort...The average lung dose per fluoroscopy session was estimated to be 11 mGy. The mean total dose to the lung was 1.02 Gy (range 0–24.2 Gy), and the mean number of fractions was 92. During the study period (1950–1987), 1178 lung cancer deaths occurred. There was no evidence of an association between risk of lung cancer and dose: the ERR [excess relative risk] at 1 Gy was 0.00 (95% CI −0.06, 0.07)."

That's right, the excess relative risk was 0.00. Only a handful of additional studies are described, using chest x-ray not CT scan, and citing excess attributable risks on the order of about 10 per 10,000 person years per Gy (a unit of radiation dose). In other words, out of 100 people undergoing a CT scan, and receiving a dose of less than one Gy, on average it would take more than 10 years for one of them to develop a cancer caused by the 100 CT scans, assuming you could legitimately extrapolate the CXR data.

In the Sodickson study, only 1 patient of the 31,462 patients studied had a predicted lifetime attributable risk of cancer that was 12%. They also estimate that 99% of the patients scanned had a lifetime risk of dying from cancer that was less than 1.6%.

CTs aren't done for nothing. They are done to detail injuries, detect strokes or lung clots, monitor for cancer relapse, etc. In such circumstances, the longshot of suffering a CT induced cancer is not foremost in one's mind. Dropping dead of a pulmonary embolus or a ruptured spleen is.

The problem, the risk we need to be worried about, is when CT scans are done in healthy subjects to detect disease states early, like lung or colon cancer. In populations that would be screened for lung cancer, the annual risk of developing a lung cancer is on the order of 0.5% per year. That dwarfs the 0.1% risk in ten years posed by CT scanning.

I am still waiting for the National Lung Screening Trial to mature, comparing CXR to CT scan screening of lung cancer. Initial data may be reported in 2010.

Until then, accept the findings of Sodickson et al for what they are, conjecture and food for thought supported by mathematical models, not direct observation. Even taken at face value, the risks are simply not that high. Their findings should not be regarded as a legitimate warning against CT scanning.
Posted by igm at 10:18 4 comments: