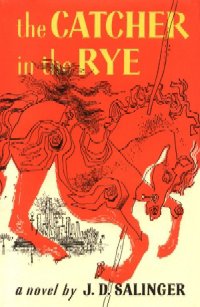 The Pharos Book Club assembled again this past week to share perspectives on J.D. Salinger’s compelling novel The Catcher in the Rye. Like the contradictions alive in Holden Caulfield, the book’s central character, the existence of Catcher itself is a study in contrasts--a work first vilified in some circles but later viewed as the narrative voice of a generation.
At first glance, Catcher is the account of a few tortured days in the life of a confused, cynical, and feckless teen. But sixteen-year-old Holden is not simply embroiled in typical adolescent turmoil: He recounts the details of this brief but eventful period in his life as he convalesces in a mental hospital after becoming “pretty run-down”. He manages to avoid revealing the precise nature of the psychological trauma which felled him.
What pushed him over the edge? And why might the wording of the latter question not be clichéd? Consider one of the symbols we discussed, namely “the catcher in the rye”. This phrase comes from Holden’s misunderstanding of the Robert Burns ballad “Comin’ Thro’ the Rye”:

Gin a body meet a body
Comin thro' the rye,
Gin a body kiss a body,
Need a body cry?

The significance of Burns’ writing sparked some debate during our discussion (it wasn’t clear to us whether the ballad itself holds hidden meaning, or if Holden’s misinterpretation is revelatory). Holden remembers part of this verse as “if a body catch a body”, and imagines children playing in a field of rye on the edge of a cliff. He also imagines himself catching them if they venture too close to the edge of the cliff and start to fall. Is it possible that he wants to prevent them from falling from a carefree childhood into something more ominous? Into the adulthood which he appears to want to reject? If so, then one could also posit that Holden himself, with no one to catch him, has fallen over that cliff into an undesirable reality. The abrupt transition proves to be more than he can bear.
Exacerbating Holden’s existential malaise are his uneasy relationships, poisonous perceptions, and unmet expectations. Through these facets of his character, we uncover more themes as we witness Holden’s interactions with his social circle, society in a broader sense, and his family. Perhaps the most apparent theme is that of the difficulty of the transition from adolescence to adulthood, illustrated by Holden’s preoccupation with (or even fear of) change, contrasted with the reassurance he derives from states of permanence or predictability. We see evidence of this dichotomy in Holden’s musings on the Museum of Natural History:

“The best thing, though, in that museum was that everything always stayed right where it was. Nobody’d move. […] Nobody’d be different. The only thing that would be different would be you. […] Not that you’d be so much older or anything. […] You’d just be different, that’s all. […] –I can’t explain what I mean. And even if I could, I’m not sure I’d feel like it.”

Salinger also explores the concept of alienation or isolation. While Holden makes half-hearted attempts to socialize with his classmates, romance putative love interests, and engage people he meets in his wanderings, he seems happiest when he is alone. Alone, he doesn’t have to face the the hypocrisy, deception, and even cruelty of the real world. He can meditate on and try to preserve for himself its beauty and purity, safe in the delusion that he himself represents a sort of virtue or honesty (this despite his ready admission that “I’m the most terrific liar you ever saw in your life”). However, like all humans (and his opinions and actions aside), he needs human contact, and he needs the security that interpersonal relationships can bring. The struggle between his outward desire for isolation and inner yearning for friendship and love may be best demonstrated in his relationship with his sister Phoebe. He displays an almost aching tenderness towards her, and is nearly overwhelmed by her radiance and untainted simplicity, but still tries to tear himself away from her. In a less powerful but similarly telling encounter, he is lonely enough to ask Sally Hayes out for a date, but then pushes her away by insulting her to the point that she leaves.
Not unexpectedly, the superficiality of the real world is a recurring theme. Holden continually despairs over the unrelenting "phoniness" he observes in almost everyone he meets (with the obvious exceptions of his dead brother Allie and Phoebe). Of course, Holden practically invites disappointment by often choosing his companions poorly and contaminating his interactions with his own deceptive behavior. With each unsatisfactory exchange, he becomes more convinced that simplicity, beauty and honesty are slowly becoming unattainable. This flawed realization helps to drive him deeper into himself and irrationality. 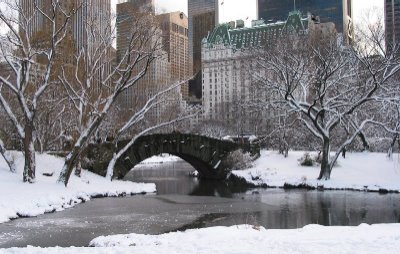 What did Salinger intend by creating Holden Caulfield and writing Catcher? Did he want readers to accept that our world and society are really so toxic and unforgiving? Or did he want us to understand that beauty, purity, friendship and love can be had if only we take the time to recognize and appreciate these gifts when they are presented to us? If we contemplate the undisturbed snow, a half-frozen pond in Central Park, and the rare Phoebes of this world, we may come closer to an answer.
Posted by igm at 08:52 1 comment:

Michael Paulus has posted a gallery of drawings in response to his gedanken experiment: what would the skeleton of a cartoon character look like? Below is the answer for Bubbles, my favorite Powerpuff Girl. Check out the rest at his online gallery. 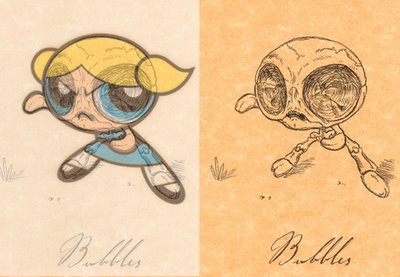