I've Had My Fill of Borat—Time to Purge

My liberal-minded shame is finally catching up with my enjoyment of Borat. Yes, it's true.

I binged on Borat at his indextube portal this week. I saw a clip that did not benefit from the editor's splice when he addressed a group of moviegoers at the Toronto International Film Festival. He was unfunny when his audience is in on the joke. He repeated jokes he'd made on other occasions and perseverated on flirting with an audience member.

But more damaging than the fact that Sacha Baron Cohen is a fallible comedian is this fact: he's mocking me, and I just got the joke, and it's not so funny anymore. Cohen's audience tends to be young, savvy, and liberal. The marks in his hilarious documentary-style segments are anything but savvy. But they are sometimes achingly patient and accommodating of Borat, whether he's incapable of correctly holding a wine glass, demonstrating his acting skills, or singing anti-semitic folk songs. On other occasions, they threaten to pulverize Borat if he nudges them a bit further.

I laughed when I watched Borat sing "Throw the Jew down the well/So my country can be free," and laughed even harder when the rednecks in the honkytonk where he was performing gleefully joined in on the chorus. But I don't find it funny anymore. It's sad. It's sad that so many people can accept that Borat is a Kazakh. It's sad that the liberal marks are so bloody tolerant and obsequious that they forget to be indignant. 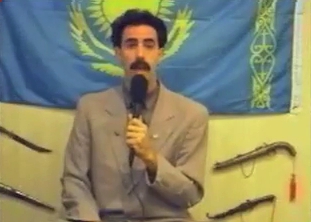 That Cohen can retaliate against Kazakhs who want to sue him for defaming their country by appearing as Borat calling for Kazakhs to "Sue this Jew!" is the height of cunning. "So Please Captain of Industry, I invite you to come to Kazakhstan where we have incredible natural resources, hard-working labour, and some of the cleanest prostitutes in Central Asia." Kazakhstan backed down. But it's a bit too cozy, isn't it? Is he merely capitalizing on prejudice or exposing it?

It's a question asked of comedians for decades: Are they pandering or are they actually rebuking us? Lenny Bruce. Andrew Dice Clay. Howard Stern.

But Cohen exhibits here a different phenomenon. He is not just indecent. He reflects Western stereotypes about Central Asia, and amplifies our prejudices about everything. He mocks our intolerance, and he mocks our tolerance. By being Jewish, he is insulated from criticisms of anti-semitism, but he can attribute his characters' anti-semitism to any group he wants, in this case Kazakhs, thereby vilifying them. He exploits an insatiable appetite for people—celebrities and everyman alike—to be on television and indulge his ignorance so they appear decent.

It is a comedic checkmate.

Listen to an interview with NPR's Robert Siegel
Posted by igm at 09:42