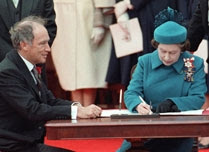 Twenty-five years ago today, on April 17, 1982—more than a hundred years after Confederation and about 200 years after the US went through the same exercise—Canadian legislators enshrined their analogue to the Bill of Rights: The Charter of Rights and Freedoms. The purpose of the Charter is to ensure that certain inalienable rights are respected by legislation and protected by the courts.

Naturally, it is the target of any legislator with contempt for those rights. 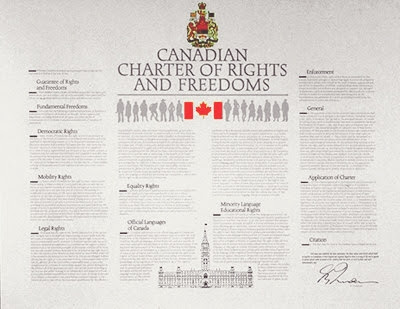 According to the CBC, events commemorating the Charter's anniversary will not be attended by Prime Minister Harper, Justice Minister Rob Nicholson, Heritage Minister Bev Oda, or former Justice Minister Vic Toews, all of whom declined their invitations.

This is not surprising since Harper has for many years criticized the Liberals for appointing "activist judges." Hypocritically, he has also vowed "to make sure our selection of judges is in correspondence" with his government's objectives. Apparently, Harper regards the judiciary as "activist" when it upholds the Charter, and appropriate when it serves the neocon agenda.

Hmmmmm...I think you've got that bass-ackwards, Mr Prime Minister.
Posted by igm at 08:17