Gaza Strip: Not As Bad As You Think 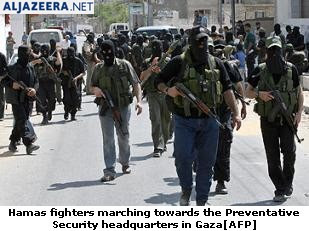 For some clarity on the recent flare-up in the Gaza Strip—variously described at best as a power struggle between Hamas and Fatah, and at worst as a Palestinian Civil War—Harper's spoke with Mark Perry, a foreign affairs analyst with a long history in the region.

His take on the situation is that a faction of Fatah, the Preventive Security Service, tried to enter Hamas-controlled Gaza despite the warnings of Hamas leadership. "But the warning was ignored and [Hamas] attacked when the Service came in, soundly defeating it."

As usual, we hear reports that simplify and obscure what is actually happening in the Occupied Territories. The true situation is more complex and more challenging to understand. Which means that most won't bother to try.

Perry remarks on the discordance between the typical media portrait of Hamas as a fundamentalist Islamist party, when it has in fact been able to lead an effective government, and "Nine of the 15 members of Hamas's Shura Council have PhD's in the sciences."

This perspective is quite different from the blustery declarations of Mahmoud Abbas, who dissoved the Palestinian parliament and swears in an emergency cabinet: "The executive force and Hamas militias are declared outside the law for having carried out an armed rebellion against Palestinian legitimacy and its institutions."
Posted by igm at 16:08