Did Bhutto Mean That Osama Bin Laden Is Dead?

I saw a video today that is rippling through the web the past couple of days. In the video, David Frost interviews Benazir Bhutto on November 2 (see excerpt at youtube).

The excerpt focuses on Bhutto's In-The-Event-Of-My-Untimely-Death letter addressed to President Musharraf, in which she reveals information about hostile members of the President's government. Bhutto describes one of these men as having dealings with a variety of unsavoury people including "Omar Sheikh, the Man Who Murdered Osama bin Laden." She does not explain the allegation. In the excerpt, Frost does not question it.

Interestingly, in an Op-Ed piece published in the New York Times the next week ("Musharraf's Martial Plan," 7 November 2007), Bhutto bitterly accuses Bush II of blatant hypocrisy, and in the course of doing so states that Musharraf—propped up by more than $10 billion in aid from the US since 2001—has not "brought about the defeat of the Taliban and Al Qaeda, nor succeeded in capturing Osama bin Laden." This suggests that Bhutto believes bin Laden is still at large.

There are legions of slathering conspiracy theorists who take Bhutto's slip of the tongue as evidence of their delusion that bin Laden is dead. Nevermind that some claim he died of "lung disease," others claim he died of complications secondary to renal failure and dialysis, and none had purported that Omar Sheikh murdered bin Laden until Bhutto said so. But for viewers of "documentaries" like Zeitgeist and Loose Change, there is no end to the inventive ways in which we have been duped about everything. The moderator of the Omar Sheikh page at Wikipedia has locked the article, barring any changes to the biography until Bhutto's remark is corroborated. He describes the comment as a "brain fart."

It is sad that Bhutto's death has focused attention on an error rather than on her life and principles. Instead, read the Op-Ed and find out what Bhutto was risking her life for. While Musharraf may have been able to reassure Bush II and charm the US media, including Jon Stewart, his military coup and its aftermath have poisoned the political atmosphere in his country. 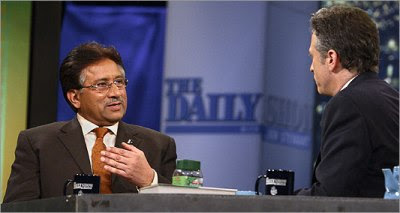 The United States ... [has] always said the right things about democracy in Pakistan and around the world. I recall the words of President Bush in his second inaugural address when he said: “All who live in tyranny and hopelessness can know: the United States will not ignore your oppression, or excuse your oppressors. When you stand for your liberty, we will stand with you.”

...The United States can promote democracy — which is the only way to truly contain extremism and terrorism — by telling General Musharraf that it does not accept martial law, and that it expects him to conduct free, fair, impartial and internationally monitored elections within 60 days under a reconstituted election commission. He should be given that choice: democracy or dictatorship with isolation.

That the US prefers dictators it can manipulate over electorates it can't is no surprise. But it is a fact that never ceases to disgust me; every American who fails to protest this travesty is complicit. 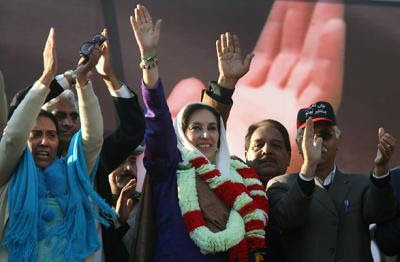