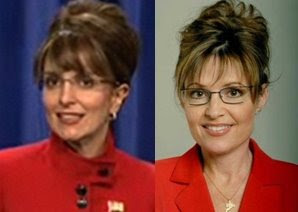 Foreign Policy's blog features a discussion of Palin's empty rhetoric and empty-headedness when interviewed by Charlie Gibson. The New Yorker features her caricature twice and several articles, editorials, and blog posts about the candidate on their website today. She was lampooned last week on Saturday Night Live by Tina Fey. She is lampooned every night by the Daily Show and the Colbert Report. She is vigourously defended by the White Knights of Fox News. She is everywhere. She is even the reason I am posting for the first time in five months. 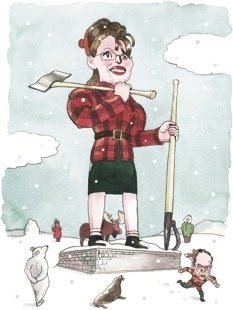 The prospect that this homey, undistinguished, untested, churchgoing hockey mom might become Vice President, let alone President, has filled some with delight and most sensible observers with dread. The former are too giddy and the latter too mortified to speak of anything else. In fact, the only way Obama can get mentioned these days is to obliquely mock her lipstick-on-a-pitbull joke with a lipstick-on-a-pig joke, a line Obama cleverly borrowed from McCain when the Reformed Maverick used it in reference to Ms Clinton's proposed healthcare plan.

Palin is at once mesmerizing and appalling. Like a tornado. Or a car crash. Or a dude that eats worms. It is so much easier to talk about her dubious credentials, keeping her Down Syndrome child, field-dressing a moose, teenage pregnancy, and so on, than it is to broach challenging policy issues. For example:

Why--along with Russia, Iran, Israel, China, Haiti, Rwanda, and North Korea--is the United States not among the 108 nations of the world to ratify the Rome Statute for the International Criminal Court? The other G7 nations all are.

How can America free itself from what McCain terms a "dangerous dependence on foreign oil" when it has been dependent on foreign oil for decades, has been unable to grow its domestic production beyond its peak in 1973, and in the last four years consumes four times as much oil as it produces: 20 million barrels a day?

Why are American taxpayers rather than the risk-taking corporations themselves, paying the price for reckless financing? Perhaps because the under-regulated operating environment the government created allowed the disaster to occur?

Why do Americans pay more for healthcare (as a proportion of GDP or in absolute dollars) than any other nation in the world? The US is a spectacular outlier spending 15.3% of GDP while the next twenty nations on the list spend between 8.3% and 11.3%. And how can the US leave so many Americans uninsured and have poorer health outcomes than thriftier nations? 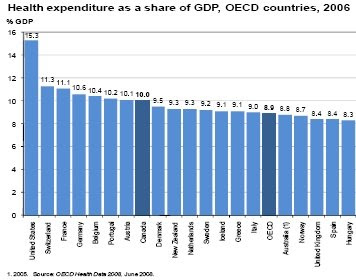 How can Republicans preach that they are fiscally responsible when, under the stewardship of Bill Clinton's Democrat regime, the US Budget posted surpluses for the first time since 1969, while under Bush II the National Debt grew by $5.5 trillion after seven straight years of deficit spending?

Sarah Palin must be quite pleased with herself. Inside of just a few weeks she has the whole world united in prayer: her narrow-minded Republican supporters praying that she'll get in, and the rest of us praying that the American electorate can come to its senses by November 4 and make the right choice.
Posted by igm at 14:38