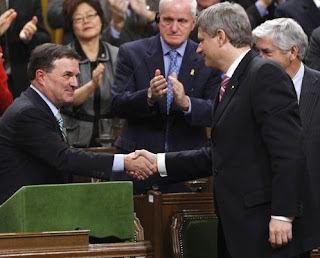 Canadian PM Stephen Harper and his Finance Minister, Jim Flaherty, took another step toward eliminating democratic process in Canada. Since the summer, he has called an election with only five weeks' notice, refused to debate opposite the Green Party leader, and now has decided to strike a despicably opportunistic and transparently anti-democratic blow against his opponents: By eliminating public funding of political parties.

As noted by L Ian MacDonald in the National Post, the move is being cloaked as symbolic of the Government's belt-tightening regime in face of dire economic times, though the $27.7m saved is a pittance compared with annual expenditures of $200b. Moreover, the stipend serves an essential function in our democracy by directing funding to parties on the basis of the number of Canadians persuaded to vote for them: $1.95 per vote.

For political parties able to procure significant donated funds, i.e. the neoConservatives, the new policy hurts, but not nearly so much as for its opponents. Check it:

It is because of this disproportionate effect on his political opponents that Harper would consider such a maneuver. Perhaps more persuasive is the decimating effect on his chief rival in Quebec, the Bloc Quebecois.

As the origin of one quarter of Canada's Members of Parliament, Quebec is essential to any political party interested in achieving dominance in Parliament. And the Conservatives most certainly are interested in that. By targeting the Bloc Quebecois, Harper has declared war on the Bloc and is prepared to allow the will of the Canadian electorate, Quebecois or otherwise, to be a casualty of that war. Rather than persuade the Quebec electorate that Conservatives have earned their vote, Harper has unsheathed his long knives to eliminate his political enemies from contention.

In this discussion, some may be reminded of a certain sanctified politician south of our border, who famously reneged on a commitment to rely exclusively on public funding and opportunistically capitalized on his record private fundraising. The difference here is that when Obama elected to use private donations, he did not then abolish the public funding system to eradicate his most threatening political opponent.

I wish to be clear: What Stephen Harper is proposing is not just crass neoconservatism, it fundamentally undermines the electoral process in Canada. Do not dismiss this. This is huge. Write to Harper and your MP. Tell them that you love Canada, True North Strong and Free, and that you reject the silencing of political parties that Canadians supported at the polls. Tell them instead to cut their bloated Cabinet, which has expanded from 26 ministers when the neoConservatives took office in 2006, to 38 ministers. Tell them to refund the public financing they received voluntarily if they're so committed to saving money. Tell them they lost your vote.

UPDATE:
I am pleased to say that the neoConservatives have decided to belay their elimination of annual allowances to political parties. It is not clear to me why. We will certainly never get a clear answer from Harper on why. For a gaffe to raise such a universal shit storm that Harper would reverse his announcement in a day is a spectacular political blunder. Regardless, at least the allowance is safe for now.
Posted by igm at 18:57