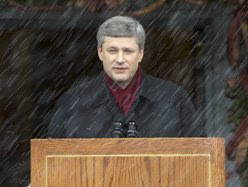 Harper provided Ignatieff and his opposition colleagues with plenty of fodder today by announcing eighteen new senate appointees while Parliament is prorogued. This is despite a clear and unambiguous commitment that the neoConservative Party would reform the Senate appointment sytem.

excerpted from the 2004 Conservative Party Platform (emphasis mine):

A plan for better and cleaner government
The Conservative Party has a plan for better and cleaner government for Canadians, and to change the way that Ottawa works.
A Conservative government led by Stephen Harper will: [...]
• End corporate and union political donations, and end forced taxpayer subsidies of political parties.
• Set federal elections on a fixed date every four years and examine other democratic reforms. [...]
• Hold elections to fill vacancies in the Senate.

and elsewhere in the platform:

In a federal system like Canada, the interests of provinces and regions must be represented in the national Parliament. Every major federation in the world – except Canada – has an elected, regionally based upper chamber. We must demand better. It is unacceptable that Canada has reached the 21st century with one House of its Parliament still a patronage body. Despite promising Senate reform years ago, the Liberals still refuse to allow Canadians to elect their own Senators. Creating an elected parliamentary chamber independent of the Prime Minister is a critical step in ending the Liberal democratic deficit and can be done without any constitutional amendments.
The Plan
A Conservative government led by Stephen Harper will appoint only elected Senators to the Senate. A Conservative government will also propose further reforms to make the Senate an independent and democratic body for all regions.

Despite that commitment, Harper has scrambled to stack the Senate deck with as many Conservative appointees as he can. His rationale, according to a press release: "If Senate vacancies are to be filled … they should be filled by the government that Canadians elected rather than by a coalition that no one voted for." Nevermind that these aren't the Senators Canadians voted for. Nevermind that the Liberal and NDP parties received 44.44% of the popular vote to the neoCons' 37.63% (CBC).

And as for how many Canadians voted for Stephen Harper, the answer to this important trivia question is: 38,545. That's how many Canadians voted for him in the last election. And that's how a parliamentary democracy works. A bunch of Calgarians elected Canada's Prime Minister. And the elected representatives of Canada's other parties, if they are galvanized to action in opposition to a wrong-headed minority government, can legitimately take control of Parliament. That, too, is how a parliamentary democracy works.

Harper has a tough time understanding these principles. Or maybe he understands them just fine, and only cries foul when they don't suit his hegemonic aspirations. Canadians must be able to see through his rhetoric to the heart of his antidemocratic agenda. In the span of a few weeks, he has suspended Parliament—where our elected representatives perform their duties—and crammed a windfall of patronage appointments into the Senate—to which he promised only elected representatives would ascend.
These are revealing acts of desperation. The lesson: power corrupts even the most mild-mannered and well-meaning neoconservatives. I suspect that lurking in a hidden room somewhere in 24 Sussex Drive, behind lock and key and a shroud of blue velvet, is the true Portrait of Stephen Harper, "It was from within, apparently, that the foulness and horror had come. Through some strange quickening of inner life the leprosies of sin were slowly eating the thing away." 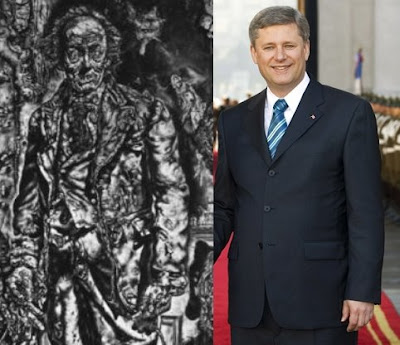