WIRED: The Truth About Cancer 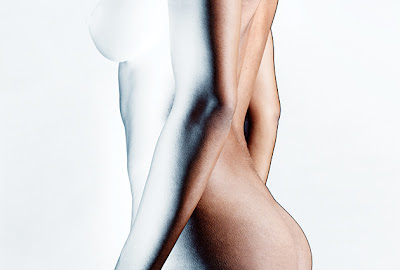 WIRED magazine begins the year with an audacious premise in its cover story on cancer: Don't try to cure it. Just find it.

Naturally, you should try to find it then cure it. Finding it doesn't do much good otherwise. But I absolutely agree that the refinements of treatments directed at prolonging the lives of those with stage IV cancer of almost any type will yield diminishing returns. The real gains will be realized when we are able to shift the stage distribution of some of the deadliest cancers so they are detected at an earlier stage, when they are more readily curable.

This is no secret. While author Thomas Goetz complains that the National Cancer Insitute "spends just 8 percent of its research funds on early detection," I caution him not to trivialize this dollar amount. The NCI is an organization with a budget of $4.8b. That translates into about $350m spent each year on research into early detection.

About 80% of newly diagnosed lung cancers have already spread beyond the tumour nodule itself. For those with stage II or III disease, we try to cure them and succeed about a quarter of the time. The statistics are terrifying. In 40% of lung cancer patients, the tumour has already spread outside the chest at diagnosis, rendering them incurable. We treat such patients, but never expect to cure them. Half the patients diagnosed with stage IV lung cancer won't survive beyond nine months, and only 2% of stage IV patients survive five years.

I think that warrants repeating: Only 2% of stage IV patients survive five years, and about 40% of lung cancer is diagnosed as stage IV disease. 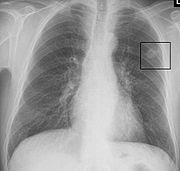 So why not find it earlier? You would think this would be relatively easy. A tumour is a solid nodule. In the lung, it would show up as a dense lesion on a low-density background of spongy, aerated lung. The lung airways are accessible to bronchoscopes, cameras which can be snaked down into the lung for a closer look and even tissue sampling.

To date, studies of chest x-rays and even CT scans have not yet demonstrated a survival advantage to screening. The outcome of the National Lung Screening Trial (NLST) of CT screening is due to be released in a few years. This study, sponsored by the NCI, enrolled 50,000 subjects and randomly assigned them to be screened either with CT scan or chest x-ray.

There are the tantalizing results of the Early Lung Cancer Action Program (ELCAP) which demonstrated a dramatic shift in stage distribution: 85% of lung cancers detected were found at stage I, confined only to the lung tumour with no lymph node or more distant involvement. The authour of the study report, Dr Claudia Henschke, has been criticized for her embracing of CT screening for lung cancer, and for her dubious though transparent funding source (the Vector group, parent company Liggett Tobacco).

Nevertheless, the results are encouraging indeed, and many observers are inclined to suggest CT screening, survival data be damned.

Other strategies have been pursued in lung cancer and I may discuss these at another time. No home runs yet. And lung cancer patients continue to die because we can't find their tumours soon enough.

Nanotechnology, microfluidics, genomics, functional imaging, all these technologies may have a role to play. But they will initially be expensive to deploy. Moreover, less than 1% of people out there are diagnosed with cancer each year. And for us to ask all of them to submit to a test looking for cancer because they might have it is a tough sell to most healthy, busy adults, and a tougher sell to private insurers or public payers, even if there is survival data.

The big three unscreened cancers are prostate, colorectal, and lung. We have great programs for cervical cancer and breast cancer screening, but even in British Columbia where mammograms are free, where vans are deployed with mobile mammography units throughout the province, with high literacy and a public medical system, where a helpful reminder is sent to you to undergo your mammogram when you need it, even here only 50% of eligible women participate in the mammographic screening program.

Care to guess the proportion of current and former smokers who will undergo regular CT scans, as often as four times a year to monitor some suspicious lesions? Smokers have lower educational attainment and incomes than non-smokers, and many of my lung cancer patients feel guilty about initiating their diagnosis. I'd be surprised if a quarter of those eligible underwent free screening CT scans. 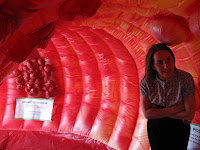 Which all goes to show that the devil is in the details in terms of cost and participation rate, even if you can demonstrate that a test works. Colorectal cancer screening, sticking a metre-long camera up your tuckus every couple of years after a two-day colonic washout, and insufflating air into your colon like it was a Thanksgiving Day float, is a tough sell, unless you're scared because family members have been dying from it.

I remain optimistic that technology can offer better screening strategies: more sensitive, less invasive, less costly. We're still in the Dark Ages here. But I'm not holding my breath just yet. Too soon for that.
Posted by igm at 14:42

Thanks for the post, Islam.
My mom died at 59 from Colon cancer and her mother had it as well. The earliest my doc will send me for screening is 40, and you can bet money that I will be in his office on my 40th birthday begging to be sent. I only wish my mom had been screened :-(
Joanne

Sorry about your mother.

A family history of colon cancer is a good reason to start screening young, and nip precancerous abnormalities in the bud.

I am very pleased that we are talking about funding and screening for other cancers than Breast. I do my mammogram every year and am greatful for the work that that the Screening Mammorgraphy Program does. However, it seems that there is a lot of pink out there and the other cancers that are not in the public eye so much do not get as much funding for appropriate screening programs. I have lost two relatives to lung cancer, one to pancreatic, and one to prostate. I have another relative that is a survivor of breast cancer and my mother is being watched for colon cancer. I believe that clearly demonstrates that screening is not colored pink, but comes in a rainbow of colors. J