The Globe and Mail's Norman Spector (@nspector4) tweeted a photo of Paul Martin shaking hands with Mu'ammar al-Qadhafi yesterday, though it was published online a year and a half ago. An attempt to implicate the Liberal Party by association with Libya's dictator and his ruthless crackdown on recent demonstrations demanding democracy?

For kicks, I collected a Rogue's Gallery of Harper's recent associations. What does it prove? Absolutely nothing. 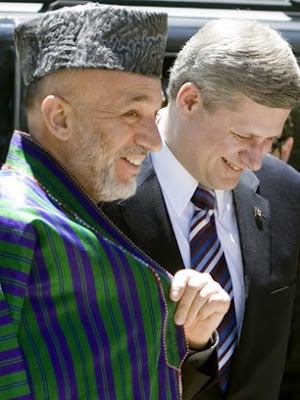 Harper with Hamid Karzai, President of Afghanistan
Karzai is characterized as a paranoid kleptocrat who relies on the support of criminal warlords and the Taliban to maintain his power 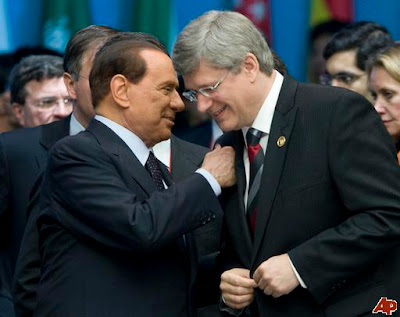 Harper with Silvio Berlusconi, Prime Minister of Italy
Berlusconi was recently charged for paying for sex with a 17-year-old. He is 74. It is the fourteenth criminal charge of his prime ministership. 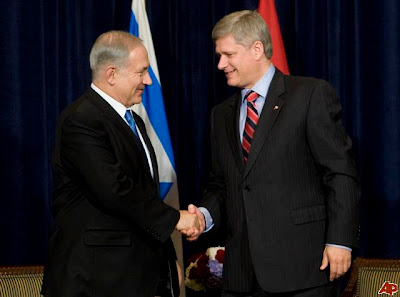 Harper with Benjamin Netanyahu, Prime Minister of Israel
Netanyahu presided over Israel's invasion of Gaza in December '08 to January '09 in which approximately 1,400 fatalities were suffered by Palestinians, nearly all civilian. The invasion was triggered by haphazard rocket attacks by Hamas which caused 4 Israeli fatalities. 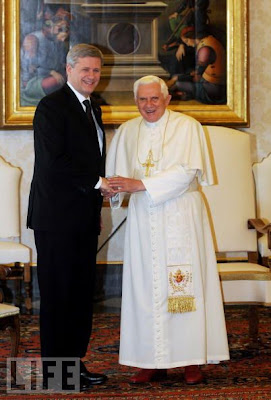 Harper with Pope Benedict XVI
While still a Cardinal, Ratzinger did not remove clergy who were sexually abusing children, concerned more with insulating the Church from scandal than children from harm, according to the New York Times

So, I'm curious about what Mr Spector was trying to prove with his photo. Hope he tells us.
Posted by igm at 00:14