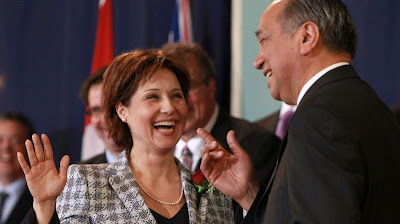 Christy Clark made a few significant promises during her run for the leadership of the BC Liberal Party, and the premiership of BC. Among these was a promise to seek a mandate as an elected premier:

"I think two and a half years in government as an unelected premier is an awful long time," Clark said in Victoria. "I think British Columbians might be right to say, by the time 2013 rolls around … 'We want to get a chance to vote for you under the basic principles of democracy.'"

Sounds pretty laudable. Today we learn that commitment to democracy is out the window.

“I was really clear about [seeking an early mandate] when I ran, but I've had enough citizens tell me that they don't think it's the right time for an election,” she said.

I get it. You pledged to do one thing during your campaign, then when the political context shifts immediately after you're confirmed, you decide to renege on your pledge. That seems really familiar...where have I seen that scenario before? Oh yes, it was your immediate predecessor, Premier Campbell. His broken promise was the reason for his abrupt departure.

So, how does this play out? It'll take eighteen months to restore the PST, apparently. Before that time, the fight will have gone out of Vander Zalm's army of canvassers, and a new preoccupation will emerge. Then you can campaign on a new mandate that includes maintaining the HST. Lo and behold, no change in the tax, and the 'people' will have endorsed keeping the tax.

The article certainly suggests Ms. Clark is a flipflop er. How can she look in the mirror. Unelected and unelectable. The ship of fools is lead by a clown.

Hello the comment in this commentary is valid as I made it.Mrs Clark is certainly not boring. After reading many comments, I will state the follow. Mrs Clark can not call an election. She can ask the man at Govt House to call an election or he can ask Mr Dix to form a Goverment. In my opinion the option should be for Mr. Dix and his team to do just that. Mrs. Clark could then support Mr.Dix or force an election.She will look stupid either way. As a citizen of British Columbia. I will ask the power to be to follow that course. In addition, as an citizen, I will suggest the vote on the baby HST has determined as change in leadership required. He has the power to order an election. He must answer my request with a Yes or NO. Regards, hitory has been made by BC voters. We are on a roll thus lets make more histroy.