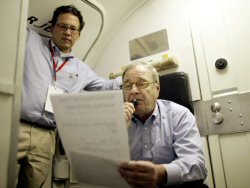 The man responsible for writing the clever things the Honourable Prime Minister says is also responsible for the PM's blog. Scott Feschuk, previously a Globe and Mail contributor who switched to the National Post at its inception, is now the PM's chief speechwriter. He is pictured reviewing a speech with PMpm in the Honourable Lavatory, wearing the PMO's off-duty uniform of blue pinpoint Oxford and khakis.

PMpm: Don't you think it's too long, Scott?
SF: Too long, sir? Ummmm...no. I think it's a, uh, a very nice length Mr Prime Minister.
PMpm: I could go on forever with this thing.
SF: I'm sure you can, sir. Mrs Martin must be very pleased.
PMpm: What? Who cares what she thinks. I need to impress the media enough to give me some airtime.
SF: ...oooo-kaay?
PMpm: Here. Cut out 200 words.
SF: From the speech! Oh, absolutely, sir.
PMpm: Of course from the speech. What'd you think I was talking about? [zzziiiip]
SF: Nothing at all, sir.

Scott Feschuk has authored the funniest movie reviews in the known universe, and for him to stodgify his writing with banal campaign fodder must be a terrific career move, though a terrible disappointment to his readership.

But there is a silver lining. Mr Feschuk is the PM's Blog Boy, and posts directly from his Blackberry to the PM's website. The blog is the only redeeming feature of the current election race. A typical Feschukism:

December 6, 6:56 AM - I didn't actually get a chance to watch Two and a Half Men last night, but darned if that's going to stop me from winning a vote by describing it:
The episode began with Charlie Sheen and that other guy, the one who didn't work between Pretty in Pink and the year 2002, proving just how wacky a wacky odd couple they are by having profoundly conflicting views about a variety of matters. Then events conspired to place Charlie Sheen in a "situation." Mayhem and canned laughter ensued. Charlie ultimately triumphed over his "situation" by learning a valuable life lesson and making anywhere from three to seven sly references to his own real-life promiscuous and badboy ways. And then everyone died a little inside.