Canadians voted yesterday. The Liberal Party, which has governed for the last 13 years, was punished for a series of scandals dating back to the start of their reign, which began under leader Jean Chretien. The current leader, Paul Martin, won an election eighteen months ago, was exonerated from the Liberals' most notorious scandal by Justice Gomery, and has led Canada to a series of surplus budgets as Finance Minister and Prime Minister that is the envy of the G8. That did not stop Canadians from bouncing him from government.

I am a fiscal small-c-conservative and a social small-l-liberal, and like most Canadians yesterday, I was frustrated by the dilemma I faced as I entered the poll to mark my ballot: How do I punish the Liberal Party's bloat and graft without punishing the Nation? How do I withdraw support from a party that has "lost the moral authority to govern" and hand it to one supporters believe received its authority from on high?

I can't think of any party but the Liberals that is better equipped to govern Canada into a period of sustainable prosperity, security, justice, and health.

But I only had one vote. And millions of Canadians decided to withdraw support from the centrist Liberals to throw it behind parties at the margins, whether they be separatists, fiscal and social conservatives, or fiscal and social liberals. Some of my friends think it's great. Some think it'll shake up those Liberals and teach 'em a lesson. I'm just worried about the damage done in the meantime. 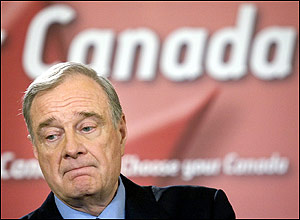 I hope the damage is limited. I will enjoy receiving $2400 a year for my twins promised repeatedly by Harper as a daycare solution. I will enjoy paying one less percent in tax for my purchases, but I'm not holding my breath for getting another percentage point off; for that Harper has to be re-elected. I expect that the social conservatism and dubious qualifications of his caucus will prevent a second term.
Posted by igm at 15:14