Posted to Pat Robertson's website is his letter to Omri Sharon, son of Ariel Sharon, apologizing to him and the people of Israel for remarks made shortly after Ariel Sharon's stroke. Robertson had insinuated that the Israeli leader was the target of divine wrath for dividing Israel. In his profusely apologetic letter, Robertson claims that his "zeal, [his] love of Israel" led him to make remarks which in retrospect are "clearly insensitive."

He finishes off his pleadings by claiming to be "one of the strongest supporters of the nation of Israel anywhere in the world." He warns of the threats posed by Hamas, Hezbollah, a nuclear-capable Iran, and "virulent anti-Semitism [...] throughout the Muslim world, Europe, and the United Nations."

Here, you can read it for yourself by clicking the images below: 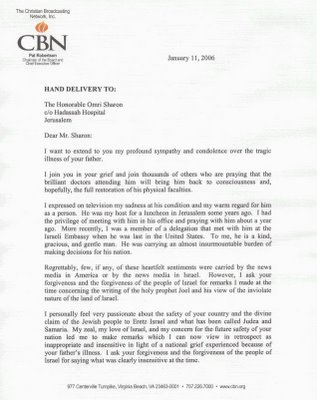 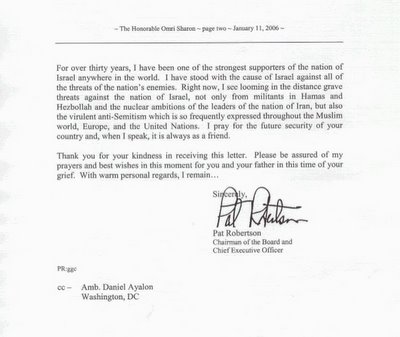