I have been thoroughly disgusted and disappointed by the reaction in the Arab world to illustrations depicting the Prophet Muhammad. The violence perpetrated against foreign embassies and representatives is unforgivable. Why do leaders in some Arab nations goad their citizens to such primitive furore? Why do they reject forums for reasoned discourse in favor of effigy-burning hordes screeching for bloody murder? 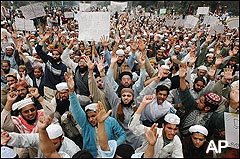 I took a look at the illustrations. They were published in the Danish paper Morgenavisen Jyllands-Postenas part of a series on free speech, this instalment featuring 12 illustrations by Danish cartoonists depicting the Prophet Muhammad. (Read this great entry at Wikipedia for more) Any illustration of the Prophet is considered sacreligious. That is why his image does not adorn Moslem scripture or mosques.

You can see the illustrations yourself and some other clap-trap at this blog. I am too repsectful of Moslem custom and not reckless enough to post them here to the Pharos Review. You will see that the illustrations are for the most part amateurish, which causes me to wonder about the sad state of illustration in Denmark. One shows the Prophet with a turban in the shape of a bomb. Another depicts him with horns. A third shows Muhammad at the pearly gates, turning away a line charred suicide bombers saying, "Stop! Stop! We have run out of virgins!" I have to confess I thought that last one was a little funny.

The rest are rather self-conscious about the whole exercise. For example, one shows a turban-wearing illustrator with an orange bearing the words "PR STUNT" nestled in his turban (?), and holding up a stick figure Muhammad. Another shows Muhammad brandishing a scimitar with his eyes blotted out by a censor's black strip.

In an open letter to "Honorable Citizens of the Muslim World" dated January 30, four months after the cartoons were published on September 30, 2005, the newspaper's Editor-in-Chief, Carsten Juste, endeavours an apology. He states:

"In our opinion, the 12 drawings were sober. They were not intended to be offensive"

"Because of the very fact that we are strong proponents of the freedom of religion and because we respect the right of any human being to practise his or her religion, offending anybody on the grounds of their religious beliefs is unthinkable to us. That this happened was, consequently, unintentional."

I gagged on this lame bullshit today. Hiding between the principles of freedom of religion and freedom of speech, this reckless provocateur dares to say that offense to Moslems was unintentional? Knowing that any depiction of the Prophet is sacreligious, and knowing Moslems' low threshold for tolerating insult to the Prophet--just ask Salman Rushdie--how can he expect anyone to believe that his intent in publishing these images was anything but deliberately provocative?

I call bullshit. Juste's chickens are coming home to roost. He should also be careful about the xenophobes cheering him on.

What if he published a single illustration of the Prophet, one with a reverential tone? That might spark an interesting and less charged discussion about the suitability of such an image. But Juste has heaped insult upon injury with his scimitar-brandishing, bomb-toting, demon-headed Prophet. "[O]ffending anybody [...] is unthinkable." Yeah, right.
Posted by igm at 21:08

I should note that the caricature of the fruit-bearing turban is of Kare Bluitgen, the Danish author whose frustration in finding an illustrator for his book about Prophet Muhammad triggered the commision of the 12 illustrations.