I feel obligated to formulate some sort of opinion about the Danish Muhammad illustrations because I am the closest thing to a Moslem that most of my friends and colleagues know. Though my parents call themselves Moslem, I really had a secular upbringing born and raised here in Canada, and would call myself atheist. In my more zealous moods, I might be classified a humanist. 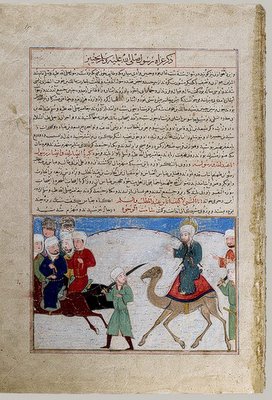 As a result, I may have some of my facts wrong about Islam, despite my attempts at fact-checking. I am finding conflicting opinions on the prohibition of images of the Prophet. I have seen images of the Prophet in Persian books on display in a museum in Barcelona last year. It is possible that Shi'a and Sun'ni moslems view the restriction differently. I will relay more to you as I attempt to confirm these facts. In the meantime, at left is a page from an Afghan manuscript with an illustration titled "Journey of the Prophet Muhammad" that I found in the Metropolitan Museum of Art's collection.

I found this helpful article at BBC Online deconstructing the 12 images. Now I understand why there is an orange in the turban of author Kare Bluitgen's caricature.

Prime Minister Chirac has warned against republishing the images and condemned their publication as "overt provocation." Denmark's prime minister stupidly alleged to the BBC that "it was not for the government to censor the media." Western democracies do it all the time to prevent libel, defamation, or incitement to hatred. For example, it is illegal to publicize denials of the holocaust in Germany.
Posted by igm at 09:17

I don't really have a problem with images of the Prophet as much as the depiction. To be honest, I find all those Buddha t-shirts to be offensive as well. I think the reason that images of the Prophet are prohibited, aside from the prevention of idolatry, is to prevent 'commonisation' if that is a word. He is a revered figure in Muslim history and in a way, by not allowing the production of his image, his memory is preserved.

The caricatures were pure idiocy and one can all but hear a sigh of relief among the people who were looking for a picture to go with their thoughts. It is the classic game: create and demonize an 'other' to create a sense of solidarity. The ensuing atmosphere was ripe for demagogues to step in, and they were out in full force on all sides. Tragic but such is life.

I think I've made up more than one word in the preceding paragraphs.

Hope you're well, the kids must be so different now.