My apologies to the handful of regular readers who have checked-in lately and found nothing new here since G's seizure. By the way, he is fully recovered. 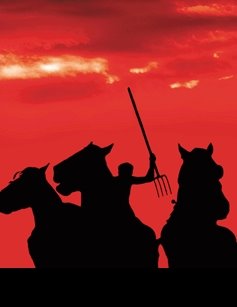 I had an interesting exchange recently with my brother-in-law, M, who dispatched me to review the Caravan Farm Theatre's recent production of Macbeth in Armstrong, BC, renowned cheese-producing region. He planned on using my review as part of a larger piece on summertime, outdoor Shakespeare productions.

The Caravan Farm Theatre productions have traditionally taken classic plays and adapted them to their local setting: the ranchlands and mountain valleys of interior British Columbia. The stage facility is rural and outdoors, rustic and friendly. Their adaptation of Chekov's The Cherry Orchard to The Apple Orchard was notable for its local color and wit. I was looking forward to a similar adaptation of Macbeth, complete with the horses and pipers hyped in the promotional material. 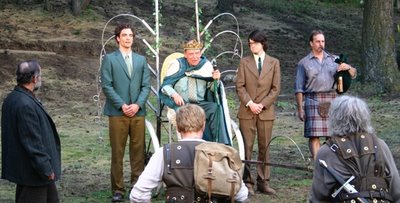 Instead, the company staged a faithful production of Macbeth with some contemporary stylistic flourishes; I was quite disappointed. I did enjoy the outdoor setting. The horses and pipers were deployed to good advantage, though no mounted skirmishes were used. And as the sun set, the sky darkened, and the wind kicked up in the trees producing an ominous and foreboding natural backdrop to the darkening tone of the play.

I accused the company of Bardolatry, a term my brother introduced me to. It could be defined as: the irrational belief of Shakespeare's works as sacrosanct and inviolable.

M thought I was being unfair: "Had they done what you expected, however, that wouldn’t have been Macbeth. [...] it would have been, say, The Pathologically Ambitious Cheese Farmer from Armstrong."

I loved the expression "cheese farmer." Of course, there is no such thing. But the phrase conjures an image of a man in springtime busily sowing rows of cheese chunks, nursing their subterranean growth through the summer, then unearthing beautiful perfectly formed rounds of cheese at harvest. A satisfying thump on the rind shows they're ripe and ready for market. That's a good cheese!

I also went to Macbeth (on Aug 24th) and posted my thoughts here:
http://www.xanga.com/home.aspx?user=KristaLouise&nextdate=8%2f24%2f2006+23%3a59%3a59.999
The production was mainly enjoyable for the fact that it is Shakespeare, and as you say, perhaps also mainly diminished because it is Shakespeare. Enjoyable because the writing is still just so good; diminished because the cast and director over-venerate the bard.

Do you agree that the lead actor had William-Shatner-itis? But anything at Caravan is a pleasant night out on the farm.