In the March 19, 2007 of Macleans, I read Nancy MacDonald's news tidbit regarding China's growing military spending with some alarm. It was not until I read the "At a glance" column in the March 27, 2007 Economist, and its accompanying graphic, that I put the growth in perspective.
"China is increasing its military budget by 17.8%, to $44.9 billion (at market exchange rates) in 2007. The country has raised military spending by over 10% every year since the early 1990s. America, though, is by far the biggest spender, allocating over eleven times as much as China to its defence budget, and more than the other nine biggest combined." 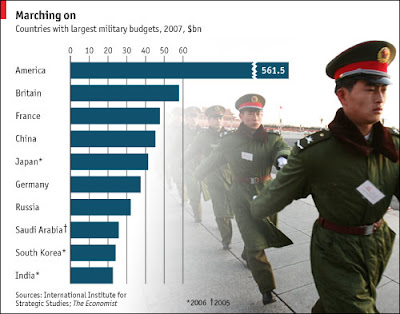