The US engaged in a series of naval exercises today on Iran's doorstep, just beyond where 15 Britons were apprehended by Iranian authorities for allegedly trespassing into Iran's waters on March 23.

ABCNews described a US Navy exercise involving "Twelve ships, 100 aircraft, and 12,000 sailors...designed to get the attention of Iran." No shit? Yeah, I guess that'll work. 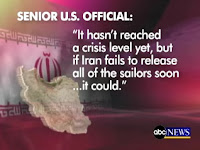 ABCNews' Martha Raddatz reported from the flight deck of the USS Eisenhower as F-18 Hornets screamed off the carrier deck behind her. Her report included the ominous sabre rattling of an unnamed US Official: "It hasn't reached a crisis level yet, but if Iran fails to release all of the sailors soon...it could."

That exercise had to be expensive. I guess when you're spending $275 m a day, what's another twenty or twenty-five million dollars? What's the upside for the US, though? The US is not directly affected by the apprehension of the alleged tresspassers. Why stage an alarmingly disproportionate show of force, invite the possiblity of inadvertent incursion into Iranian airspace or waters, and risk escalating tensions with a quite reasonable-sounding bargaining party? Well, reasonable aside from the whole nuclear proliferation thing. But that may be yet another reason to tread lightly.

Have you looked at a map of Iraq's coastline? It is a startlingly narrow fragment of a delta about seven miles wide jammed between Kuwait and Iran. It takes pretty steely nerves and a steady hand to pilot the waters beyond. The maps below (courtesy the Guardian Unlimited) show the geography of the area with a close-up of the location where the Britons were captured. 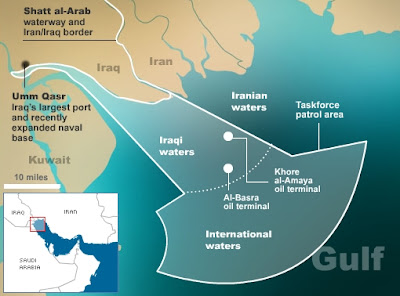 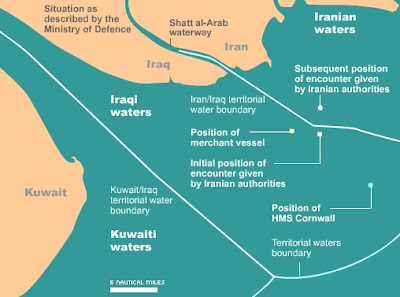 I hope the parties stand down before they do something we'll all regret. That's the crux of it, isn't it? What do the politicians care? They'll be safe. I don't think they realize that their posturing kills.
Posted by igm at 16:51