The official website of Hillary Clinton's website features a bizarre Pop Quiz. It accuses the Obama campaign of lifting strategies from the Republican Attack Playbook, and calls Obama on his claim that he has been "measured" in his tone regarding Clinton. 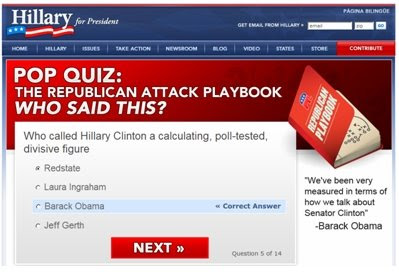 The quiz concludes with a statement that Obama has described Hillary as "calculating, polarizing, divisive, dishonest, secretive, disingenuous, and untrustworthy," then makes no effort to actually refute any of these claims! Bizarrely, a littany of the most venomous accusations levelled against Clinton are parroted back to her own supporters and attributed to both Republican and Obama sympathizers, suggesting that at least on Hillary's faults, both parties can agree. 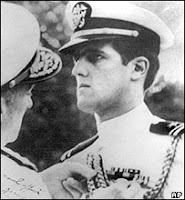 This strange episode in the campaign reminds me of the last Presidential election in which Bush II was somehow able to persuade the American populace that Kerry was not heroic enough in Vietnam, though Kerry did not seek out a Purple Heart for his acts of bravery while battling in country. He convinced Americans that Kerry was disingenuous for treasuring rather than discarding the awards his country decorated him with. He convince

d Americans that Kerry was unpatriotic for serving in Vietnam then testifying that the war was unjust because it flew in the face of American values. Yet Bush II did everything possible to steer clear of active duty in Vietnam, and was a delinquent on his weak-ass stateside military commitment.
In the case of the Democrats, Clinton intends to discredit Obama for accusing her of wrongdoing, as if that is somehow more egregious than the wrongdoing itself.
Posted by igm at 21:41