Obama Seeks "Cure For Cancer In Our Time" 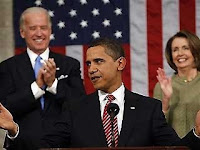 "In his speech to a joint session of Congress on Tuesday, Obama referred to his economic recovery plan and said, "It will launch a new effort to conquer a disease that has touched the life of nearly every American, including me, by seeking a cure for cancer in our time." Both his mother and grandmother died of cancer.

The economic stimulus measure signed by Obama on Feb. 17 included a huge, two-year infusion of about $10 billion for the National Institutes of Health, which funds research, of which about $1.26 billion is expected to go for cancer research."