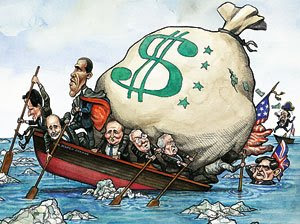 During the campaign, McCain accused Senator Obama of seeking $932m in pork barrel projects for his state, Ilinois. Now President Obama has petitioned Americans and Capitol Hill to rescue the country with a trillion-dollar bailout scheme several orders of magnitude bigger--enough for a thousand Illinois-- surrendering control of the expenditures to Congress in exchange for safe passage, at least according to the Economist:

This week could have marked a turning-point in the an ever-deepening global slump, as Barack Obama produced the two main parts of his rescue plan: a $789 billion stimulus plan and his outline for a (probably even more expensive) bank bail-out. This double offensive could have broken the spiral of uncertainty and gloom that is gripping investors, producers and consumers across the globe. Alas, that opportunity was squandered. Mr Obama ceded control of the stimulus to the fractious congressional Democrats, so the fiscal boost is less efficient than it should have been. The financial-rescue blueprint, touted as a bold departure from the incrementalism and uncertainty that had plagued the Bush administration's Wall Street fixes, is depressingly more of the same: timid, incomplete and short on detail.

John Micklethwait
Editor in Chief
Posted by igm at 00:01