Harper: All Parliamentarians Have a Role 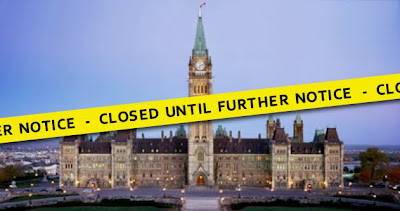 Harper was interviewed today on BNN by Kim Parlee. In response to Parlee's question, "Is this the time to suspend Parliament?" Harper replied:

SH: All Parliamentarians have a role. What the government is doing is taking the time to refresh its agenda [...] An agenda for the economic recovery [...] All of our members are out consulting with Canadians, and we invite members of the opposition to do the same and give us their input.

Really? My MP, Ron Cannan, has not issued a media advisory that he will be conducting any consultations on the economy. In fact, he hasn't issued a media advisory since September 2009. His calendar is wide open. After checking out the websites of other Conservative MPs in alphabetical order, Abbott, Albonczy, Aglukkaq, Albrecht, Allen, Allison, Ambrose, and finding no sign of pending consultations, I'm not sure who these members intend to consult, how they intend to notify them, or when they intend to do so. I think Allison's calendar is particularly telling: 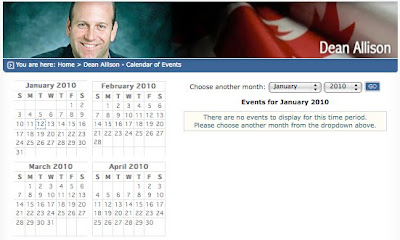 While the House is prorogued, and the Parliamentary committees are disbanded, and no consultations are scheduled by the Conservative MPs, exactly what is the role of these Parliamentarians?

KP: Canada is seen as reliable, stable, even a financial haven right now. Even the Economist [...] has taken issue with you suspending parliament. Is there a risk that Canada's reputation and being stable is at risk because of this move?

SH: No, there's zero risk. Canada is and will remain the most, I think we're the most longest [sic] uninterrupted constitutional system in the world. Look I think that the uh, the games begin when Parliament returns, and the Government can take our time now to do the important work to prepare the economic agenda ahead. That said, as soon as Parliament comes back, we're in a minority Parliament situation, the first thing that happens is a vote of confidence, and there'll be votes of confidence and election speculation for every single week after that for the rest of the year. That's the kind of instability that markets are actually worried about.

Actually, the prorogation of Parliament sparked election speculation. There are several Hill insiders who suggest that's the case, that Harper has done the math and may be retooling, not for the economy, but for another election. That possibility is becoming increasingly remote, however, given the latest polling from EKOS which puts Conservatives only a few percentage points ahead of the Liberals, squandering a 14 point lead from October.

Regardless, talk about poison pill budgets; rejection of collaboration with other parties dismissed as separatists, socialists, and elites; and relentless attacks to the checks on the PM's authority have all done more to destabilize Canada's political fortunes than any other development since the creation of the Bloc Quebecois.

According to his former advisor, Tom Flanagan: "The Government's talking points really don't have much credibility. Everybody knows Parliament's prorogued to shut down the Afghan inquiry."

So, trust Stephen Harper when he says that all Parliamentarians have a role.

Apparently, it's just not in Parliament. Now I get it.
Posted by igm at 22:13