Last Friday Stephen Harper claimed that his government's tax regime of lowering business tax rates since 2007 has gained more revenue for Canada, benefiting us all.

"I can't emphasize enough the importance of keeping our tax rates low and competitive. We have legislated in this country—in 2007, some years ago now—we legislated a series of lower business tax rates.

"Now, the opposition has been critical of this, but the fact of the matter is that we are gaining more revenue from the business sector by having low rates than we were by having high rates. So this is in the interest of everybody. It's the direction we're going to continue to go in."

- January 7, 2011 in Welland, ON
I don't get the impression that the business sector is contributing more revenue from the Department of Finance's own data tables. Over the last four years under Paul Martin's stewardship as finance minister then Prime Minister, and the two years prior to Harper enacting his corporate tax cuts, revenue from corporate income nearly doubled from $22.2b (2002-03) to $40.6b (2007-08). Tax revenue from corporate income as a share of total tax revenues peaked at 20.0%. Since the rates were cut from 22.12% to 18% among other measures, revenues have plummeted, to $29.5b in 2008-09 and $30.4b in 2009-10.

Some may blame the economic downturn for the experience of the last few years. Though individuals suffered through the downturn as well, they have contributed disproportionately to government revenues. From 2007-08 to 2008-09, the share of revenues contributed by personal income tax increased from 55.5% to 60.6%, while the share from corporate income tax fell from 20.0% to 15.4%. 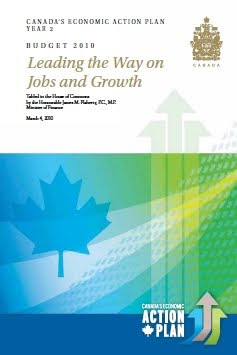 Though his own Department of Finance projects that the revenues from corporate income tax will fail to recover to their peak levels by 2015, Harper made the bald-faced lie that "we are gaining more revenue from the business sector by having low rates than we were by having high rates." Instead, his cuts to corporate taxes exacerbate our fiscal imbalance and force individuals to shoulder a greater share of the tax burden.
Posted by igm at 16:25