iPhone: Not for me 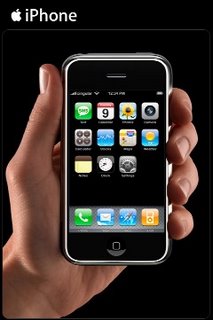 As avid readers of this blog know (I may be the only person that can be described in that fashion), I have been eagerly awaiting the announcement of Apple's iPhone (see post from July). I imagined a phone only better, graced with good looks and charm: those design and interface flourishes that only Apple seems to know how to do.

I purchased Apple stock in September in anticipation of an announcement at the Developers Conference, but nothing was said. I held on to the stock until late December when, after a 24% run-up, I decided to take the money and run. The next week, Apple's stock price dropped sharply after concerns over stock option backdating were raised, but bounced back when Steve Jobs was exonerated. Then Mr jobs announced the iPhone, and the stock spiked up almost 20% over the ensuing days from the bleak trough just a couple of weeks earlier. 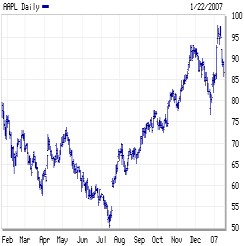 The stock price has now cooled as the hype for this beautiful device wears off and the reality of an overcommitted and underdelivered product sets in. There are reasons why Steve Jobs should not have announced what he did, when he did, clearly enunciated by Mike Elgan at ComputerWorld. There are reasons why the device itself is lacking.

My main criticism is—despite the beauty of the device and the elegance of its interface—it is not first and foremost a phone. I have always had a problem with convergent devices because they do too much and rarely do it optimally, leading to bulky design, delayed rollout, expense, component failure, and differential rates of obsolescence. I was talking to friends this week and said I can't wait for the iPhone nano, a product which is now just a figment of my imagination but one which could actually appeal to the broader market: A device that is functional, portable, fashionable, affordable, and replaceable.

iPhone nano, Steve. Think about it.