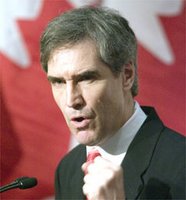 The passage of a motion in the House yesterday received virtually no press. I was browsing the Hansard record last night (don't ask) and discovered that Ignatieff passed a motion criticizing the Neoconservative Party of Canada of doing everything from stacking judicial appointments, to neglecting child care, renouncing Kyoto, assaulting democracy, and being "narrow minded." Here's the text of the motion (YEAS 155; NAYS 122):

"That, in the opinion of this House, the government is failing to act in accordance with the democratic and open values expected of its office by imposing a narrow minded, socially conservative ideology as reflected in its approach to the judicial appointment process to dramatically increase the influence of right-wing ideology in the judiciary, its refusal to honour Canada's international obligations under the Kyoto Protocol including a refusal to act immediately to introduce regulations under the Canada Environmental Protection Act, its misconception that Canadians don’t want or need a dramatic increase in child care spaces on a national basis, its budget spending cuts directed at aboriginal people and silencing advocacy work done on behalf of women and the most vulnerable Canadians even in the face of budget surpluses, its failure to protect and promote linguistic and cultural diversity, and its undemocratic assault on farmers who support the Canadian Wheat Board."

The only press I found was in the National Post, which played the role of Conservative Apologist, pointing out that Liberals exercised partisan patronage during their long tenures in power.

Here is a link to the debate in the House when the motion was presented on February 15. Some excerpts from that debate:

An interesting and lively debate.