Chomsky Gives Me The Red Pill

I just finished reading Noam Chomsky's Failed States this weekend. It is always unnerving to exit the internally consistent mediasphere of the US and get a whiff of perspectives abroad. Chomsky is one of few Americans who seem immune to the obfuscating propaganda that saturates our senses, parsing the truth from American and foreign sources.

There are good reasons to resent the US and its policies, and nearly every nation in the world can cite some grievance against the state or the corporations it serves. Chomsky's persuasive thesis is that the US, by its own definition, meets the criteria for a failed state. It is widely acknowledged by many countries as their greatest threat to national security. It acts unilaterally, often in contempt of international consensus or law. It ignores the will of its people, safeguards the interests of corporations and the powerful, and increasingly shirks its responsibilities to the citizens who need the state most.

Chomsky opens by asserting that the most important issues to those concerned with human welfare are: the threat of nuclear war, looming environmental disaster, and that the government of the world's leading power is acting in ways that increase the likelihood of both calamities. The Bulletin of the Atomic Scientists recently moved their Doomsday Clock to five minutes to midnight for just these reasons.

While Chomsky is compelling, he makes a couple of careless contentions that should be scrupulously avoided in the future to limit assaults on his credibility. Specifically, he dismissively describes Robert Kagan's commentary on transatlantic relations as "Europeans being 'from Venus,' while 'Americans are from Mars.'" This reduction substantially misrepresents Kagan's thesis. His position is not that Europeans are fundamentally different from Americans. He describes Europe's long history of military adventurism, unilaterality, and dim view of the law. Europe's current interest in multilateralism and international law is not the consequence of an enlightened moral centre or congenial temperament, but of an emasculated military in the last half century.

Chomsky also offers up dubious arithmetic when he contends that developing domestic oil supplies in the Arctic Northern Wildlife Refuge "entails even greater reliance on Middle East oil." He also tries to argue that there is no Social Security crisis because "If American society was able to take care of the boomers from ages zero to twenty, there can be no fundamental reason why...[America] cannot take care of them from ages sixty-five to ninety. At most, some technical fixes might be needed." 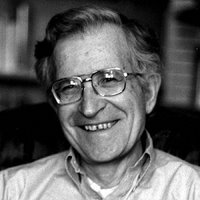 Perhaps I am being unfair to Chomsky to focus on these shortcomings when he presents a relentless account of where America has gone and continues to go wrong. Failed States left me despairing for the future my four boys will inherit from my generation. The world's most powerful nation's "formal democratic practices are largely reduced to a device for periodic mobilization of the public in the service of elite interests." American efforts in Iraq, ostensibly to quash terrorism, have inspired unprecedented Islamic radicalism, factional power, and terror. The US renounces international law governing the treatment of prisoners of war, nuclear proliferation, trade, and international intervention.

Speaking of Israel's relations with Palestinians, Chomsky paraphrases scholar and scientist Yeshayu Leibowitz's warning that "oppressing another people would lead to serious moral degeneration, corruption, and internal decay." The caution applies equally well to the US, with its awesome sphere of dominion, and oppression abroad and--often overlooked--domestically.

Our current government's sympathy for the US's religious fundamentalism, corporate primacy, fear-mongering, and militarism ranks behind that of only the UK and Australia, perhaps. That is a disturbing development. Canada has long had a reputation as a successful plural society, a social welfare state in the model of Western Europe, a mediator of international relations, a peacekeeper, and a tolerant, progressive society. But, as Chomsky warns in the US, reactionary statists are seeking to exploit current opportunities to enshrine policies which serve the powerful elite "so that it will be no small task to reconstruct a more humane and democratic society."

The only question left is, who will destroy us first?

Admittedly, I'm unfamiliar with your blog and only stumbled upon it.

After reading your book review, however, it would seem fair to say that we have fundamentally different views of Chomsky's work. In reading his books, I might be inclined to make provocative statements, such as 'reading too much Chomsky causes brain rot'. Aside from some questionable logic, his historical accounts are tainted with serious flaws - at least as far as historical academia is concerned. The famous liberal historian Arthur Schlesinger Jr. (and former staff member of the JFK admin) warned others about "prophetic" and pseudo-historians. In fact, historian Kevin Mattson provides a similar warning regarding Howard Zinn (noting Chomsky in passing) (Democracy Journal).

There are many other small-l-liberal sources, which are much more credible.