He told us he has been down this road before, that he had seen persuasive evidence of global warming in the 1980's, and had consulted Canada's Minister of the Environment in 1988, Lucien Bouchard, who got it, who understood that climate change threatens the species. Then the efforts of international consensus-building were undone by sustained obstinance and proapaganda by the US and other corporate sympathizers. And here we are, among the most egregious environmental outlaws in the world, dumping more per capita carbon dioxide and sulfur dioxide emissions and consuming more per capita energy than nearly any other nation.

So now Dr Suzuki is reduced to this, preaching his message to Canadians a couple hundred at a time. He hopes to persuade the electorate so that the leaders who jilted him will be replaced by those he can trust.

Some interesting ideas Dr Suzuki presented:
It wasn't all serious. There were also his memorable anecdotes of picking cherries in the Okanagan, and of growing up in a family of six in a thousand-square-foot home in London, Ontario, stories with a message that struck a chord with my boys.

There was an air of desperation in Dr Suzuki's presentation. He told us that the envronment is now ranked as the number one priority by Canadians. He clearly intends to build on this momentum going into Canada's impending election to fill the House with sympathetic legislators. But I don't know that it's enough.

I asked whether the environment is too important to leave in the hands of politicians with four- or five-year mandates. [The number one issue that the environment supplanted? Health care. And we've seen politicians in Canada's richest jurisdictions, elected to protect the public system, focused on eroding it and delisting its services.] I said that legislators don't protect our civil rights, the courts and the Charter of Rights and Freedoms do. I proposed that we develop a Charter of Environmental Protection as an analog. More on that another time. 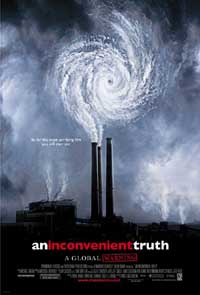 I wish I could have stayed longer. (I left after a couple of questions including my own.) I watched The Nature of Things as a lad, and his text on genetics is one of the first textbooks I purchased, back in 1987. I would have like to meet this great Canadian, and perhaps someday soon I will. But I had to get my flagging boys to bed. We debriefed at home. I plan on screening An Inconvenient Truth for them later this week to reinforce some of the mesaages we heard. If they feel invested in their future, maybe they'll keep my wife and I on task.
Posted by igm at 21:18