US Embassy: Can Harper Deliver on Military? 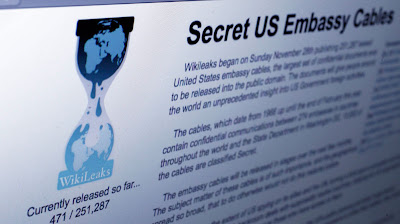 A recent cable leak describes Prime Minister Stephen Harper as unable to deliver on his "Canada First Defence Strategy." The Afghanistan mission left Canadian Forces so overextended that a "short operational break" will be necessary to allow the Forces and funding commitments to recover.

Harper's goal, the cable continues, is to transform the Canadian military "into the kind of expeditionary force that the government had described in the 'Canada First Defence Strategy,' seeking to evolve Canada's 'medium weight' army into a force capable of conducting both major combat and counterinsurgency operations against traditional or asymmetric threats nearby or far afield, as well as in rural, urban, and littoral domains."

According to the cable, authoured March 2009, because Harper has struggled to increase defence spending in the context of trying to restore fiscal balance, he has failed to meet his commitment to spend 2% of the budget on defence.

Well, not anymore. In the latest Treasury Board 2011-12 Main Estimates, National Defence will be taken care of quite nicely, thank you. While the Departments of the Environment and Agriculture--just to name a couple--are experiencing cuts of 20%, National Defence is enjoying unprecedented spending. Harper will finally achieve his target of 2% of budget in 2011-12: 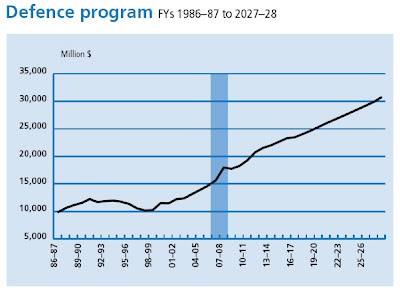 A net increase of $191.8 million is due to an increase in operating costs of $368.9 million, a decrease in capital costs of $191.0 million, and an increase in grants, contributions and other transfer payments of $13.9 million. The major changes are:
• $281.4 million for Budget 2008 commitment to allow the automatic

annual increase on defence spending to 2% from the current 1.5% beginning in 2011–12;
• $221.7 million net increase in the spending profile for infrastructure projects;
• $120.3 million increase for Canada First Defence Strategy and to support Canada’s domestic and international security operations and challenges;
• $321.8 million net decrease in the spending profile for Major Capital Projects; and
• $102.3 million decrease due to cost containment measures to reduce the rate of growth in operating expenditures announced in Budget 2010.

This is Harper's vision for Canada. Slash billions from government except from the military and healthcare. His platform for healthcare spoke only of pouring money into the system at 6% a year for another decade--not exactly a nuanced, policy-driven approach from government with a whole Ministry at its disposal.

Even when the country is tens of billions of dollars in the hole, and Harper refuses to replace public servants shed from the payroll through attrition in nearly every government department, shedding government capacity right along with them, Harper is expanding the military, enabling it to embroil Canada in more missions like the one in Libya, a nation that poses no direct threat to Canadians. No one believes his numbers on the cost of the stealth fighter program. And once he expands the military to his target of 70,000 regular and 30,000 in reserve forces, he'll create a massive long-term payroll liability--soldiers and officers are public servants, too--over our 2009 levels of 20,000 regulars and 19,000 reservists.

We saw what happened during the G8/G20 summits when security forces are over-resourced for their mission: they go looking for problems to solve even when none exist. When police were handed a billion-dollar hammer, every protester started looking like a nail. I hope we won't see similar unintended consequences from more than doubling our military.

Welcome to your Secure, Stable, Prosperous Future.
ADDENDUM: From the Manning Centre's 2011 Barometer
Canadians are not convinced that a strong military is a pre-condition for promoting Canada's national interest, and the level of support for "patriotism and a strong military" has fallen by 30%. 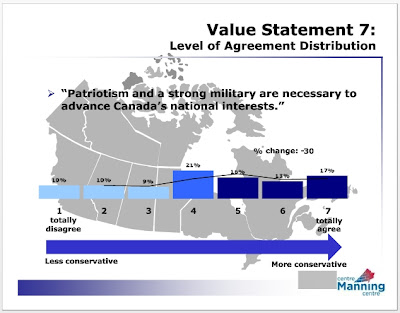 Do you really think having 20,000 regulars ( of which 13,000 may actually be the sharp end of the stick) is reasonable for a country as wealthy as Canada?

It is embarrassing that a country with 30+ million people cannot field any more than 2000 soldiers at a time.

It is a realty check that Canada needs to double its forces and then some.

The troop total should be determined by our mission requirements, fiscal limits, and diplomatic commitments, not our level of embarrassment.

You are correct, however, that the number of regulars per 1,000 citizens was quite low compared to other nations when we had 20,000, putting us at a ratio of about 0.6. At 70,000 regulars, we're up to a ratio of 2.1. That places us ahead of countries like China and Brazil, but still leaves behind every other nation in the G8 except for Japan.

But I guess this goes to the heart of the question of how we see our role in the world, and how we should achieve it. Canadian foreign policy has historically been linked to notions of peacekeeping, diplomacy, multilateralism, and development. Now we're delivering democracy to Libya from the payload of a bomber. That strikes me as a brutal strategy that hardens and militarizes our target, rather than moderating and civilizing it.