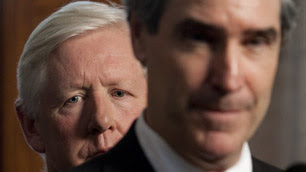 A cable released by wikileaks on May 27, 2011 describes a luncheon between the US Ambassador and "Liberal Party Leadership" Michael Ignatieff and Bob Rae that occurred October 23, 2009.

The cable relates that Rae's only remaining stated political ambition is to be Foreign Minister. The account of the dynamic between Ignatieff and Rae is notable:

"The dynamics between one-time friends and later rivals Ignatieff and Rae remain clearly tense, with Rae arriving late and then immediately dominating the conversation, while Ignatieff sat back almost meekly. Rae was by far the more forceful and eloquent of the two and showed little deference to his party chief, without at any time displaying any rudeness or personal animosity. He came across as better read and more substantive than Ignatieff, who stuck mostly to pleasantries and generalities."
Posted by igm at 00:34

Well, Canadians got rid of one, and the Liberals are stuck with the other.