Much is said about the enhancement of our capabilities through digital living. The gradual digitization of our analog lives brings with it less enrichment, not more. Recorded performances instead of live ones. eBooks instead of paper ones. Handheld music collections heard through earbuds, instead of banks of analog LPs lovingly spun on a HiFi. Megapixel photographs instead of film.

I came across an artist's site that intrigued me. Jason Salavon uses his digital tools to render striking commentaries on our culture. He applies statistical analysis to pop culture images and produces works that average multiple images into a single composite, average a single image into a single color, display data points as three-dimensional bursts of color, and other manipulations.

The result is an elegant display of the monotony of our culture, as in 100 Special Moments, described here by the artist:

Each of these works utilizes 100 unique commemorative photographs culled from the internet. The final compositions are arrived at using both the mean and the median, splitting the difference between a specific norm and an ideal one. 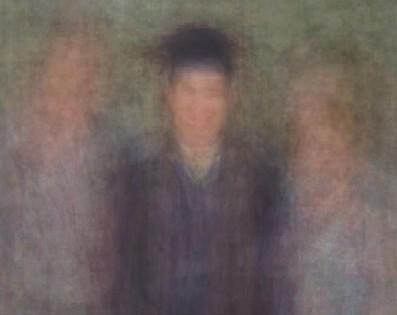 The four panels of this work show 4 archetypal commemorative photos: Newlyweds, Little Leaguer, Kids With Santa, and The Graduate (shown). It strikes me as profoundly sad that so many of us follow the same path depicted in these photos, a well-trodden path that must constrain and limit those who take it. And yet, as a father, I fear my children straying from this path into the unknown.

In The Grand Unification Theory (Part One: Every Second of Star Wars), Salavon captures one frame per second of Star Wars and arranges them on a grid by luminosity. The series of images ceases to be a narrative and is merely an abstraction, but relies on the iconic imagery of one of the most popular movies of all time for its elements. Shown below are overall views and deatil views. Snow White, It's a Wonderful Life, and Deep Throat are given the same treatment. 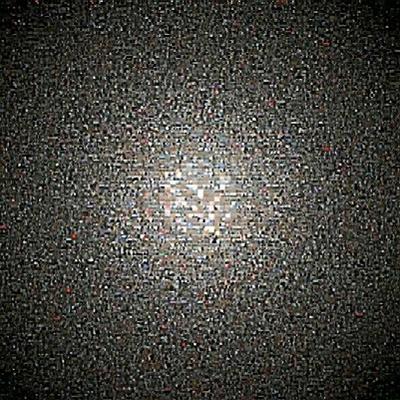 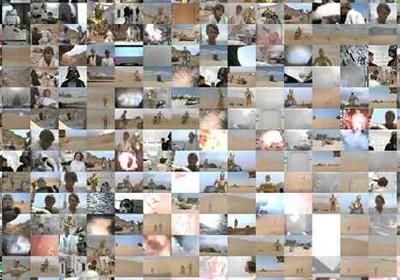 Salavon does not use his digital tools to present dubious simulacra of the real. Rather he presents us with the banality of the digital, pixelating and deconstructing these images from popular culture, then rearranging them into haunting abstractions.

Here's a link to the bibliography at Salavon's site for further reading, including a selected blogospherography
Posted by igm at 12:40