Fareed Zakaria's opinions have given me pause on a couple of occasions now. His oversimple, naively idealistic countermeasure to terrorism is "to discredit, delegitimize and dismantle barbaric ideas" (in Newsweek, "How to stop the contagion"). Does he really believe that'll work? Kind of like telling people that smoking will give them lung cancer, bad teeth, impotence, and stunted babies. Problem solved, right?

And Friday on Foreign Exchange with Fareed Zakaria, Zakaria asks whether "in all fairness" to the Bush II administration, that Bush's "standing up" to regional strongmen in the name of democracy ought to be viewed positively by Arabs. At the other extreme, reported by journalist Yaroslav Trofimov, are those Arabs who perceive American incursions into the region as genocide against Moslems.

I was surprised at the tone of the conversation. It seems apparent that the US's designs are neither the dissemination of democracy, nor the eradication of Moslems, but the extension of its empire: securing the resources needed to fill its gaping maw, and securing leadership compliant to its needs. Any resemblances to democracy or accumulating corpses that occur as a consequence are purely incidental. 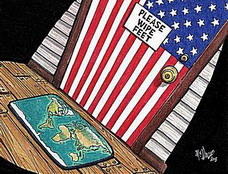 This point is probably best illustrated by the strangest of bedfellows: the US and the Kingdom of Saudi Arabia. These countries have enjoyed a healthy political, economic, and military intimacy for decades that was only briefly interrupted by a spat in 1973. Each country harbours, nurtures, and manipulates religious fundamentalists. Each country tolerates the moral excesses of the other. Each country funds terror abroad while publicly denouncing it, in turn making itself a target of terror.

These contradictions are a consequence of 20th century imperialism, and the concordance of the interests of statesmen with those of the corporations they serve.