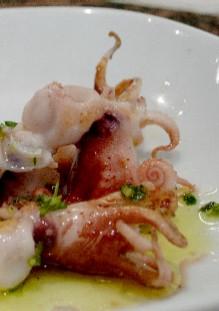 We woke up at 1230h; bit of a late start. We had to rush to get to Cal Pep's in time for opening. Arriving at 1325h, before the metal roll shutter goes up, you are virtually guaranteed a seat at the counter. Ten minutes later, and you're out of luck.

We sat at Paco's station again and had vi blanc with our gamba fritas, pulpitos (shown), baby clams, artichoke hearts, garbanzos with spinach and jamon, and finally botifarra blanc with liver and port sauce. Crema catalana to finish. What a heady, delicious meal.

Pep wasn't mannning the fryer and griddle today, he was working the room. Not much hissing. Just great food.

When we returned to the flat, we noticed that the corner of Carrer del Rec and Passeig del Born is more lively at 3 in the morning than 3 in the afternoon. 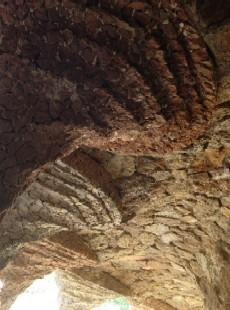 Off to Park Guell, another Gaudi joint. The Park amply displays Gaudi's flair for naturalism despite his careful attention to design. His creations here are inspired by, adapted from, and complementary to nature. The Seussian swirls topping some of his columns, the heaps of stone loosely forming others, everywhere were rough and irregular surfaces begging to be touched. Many people--myself included--did just that, feeling their way through the park.

We made a short, somewhat unrewarding visit to the Palau de la Musica Catalanya as it was closed to touring visitors and cameras, and as the light was failing by the time we arrived. We'll return in a few days for a chamber music recital.
Posted by igm at 10:33

Cal Pep is a culinary institution in the best sense of the word. It's not luxe by any stretch (leaving aside pulpito prices), but it serves satisfying, delicious, local cuisine, and does so quite efficiently and in a very neighborhood setting. I hope the lack of too many obvious tourists means it hasn't been "discovered" yet.