I read in the New York Times today that Dick Gephardt, former Presidential hopeful and Democratic House majority leader, is now a shill for Big Coal. Speaking on behalf of Peabody Energy, the world's largest coal producer, Gephardt is promoting coal as an "alternative fuel."

The crux of the case is that newer technologies to generate power from coal, and to convert coal to liquid fuel, would allow a reduction of carbon dioxide emissions. The power generation angle was recently profiled in Discover.

The main problem with coal is that when you oxidize or burn coal, you break carbon-carbon bonds and link the carbon to oxygen, releasing carbon dioxide. When you use fuels like octane, you break carbon-carbon bonds and more than twice as many carbon-hydrogen bonds. Combustion releases carbon dioxde and water. For natural gas, the ratio of C-H to C-C bonds is even more favorable.

Coal is the least desirable fuel choice for anyone interested in reducing greenhouse gas emissions. The NYT printed a graphic accompanying the story showing how unfavorable coal is as an alternative fuel, even with expensive coal-to-liquid conversion processes, based on data from the Environmental Protection Agency. 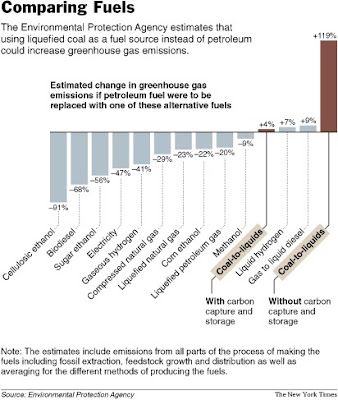 So what does this technology accomplish? Well, if the US is going to burn coal anyway, better that it be done with these cleaner technologies. That goes for China, too. But the real agenda here is to make energy independence—a euphemism for allowing the US to be more hostile to OPEC states like Venezuela and Nigeria—a more palatable decision to an electorate that is emissions conscious.

What happened to letting the market's efficiency decide on the appropriate distribution of capital? The corporate agenda in the US has nothing to do with laissez-faire capitalism, and everything to do with corporate favoritism, pork barrel politics, and subversion of the democratic process.

According to Howard Herzog, a principal research engineer at MIT, “At best, you’re going to tread water on the carbon issue, and you’re probably going to do worse.” How about this as cause for alarm: “If all the coal-burning power plants that are scheduled to be built over the next 25 years are built, the lifetime carbon dioxide emissions from those power plants will equal all the emissions from coal burning in all of human history to date,” says John Holdren, a professor of environmental policy at Harvard University's Kennedy School of Government.

Democratic Presidential hopeful Barack Obama is a champion of coal-to-liquid technology.
Posted by igm at 10:08