Victimhood Is In The Eye Of The Beholder

I saw these pictures in Yahoo! News today. One shows Ehud Olmert inspecting a damaged Israeli home. The other shows the remnants of the Hamas Executive Force. Olmert looks half-tempted to stick that light fixture in himself. 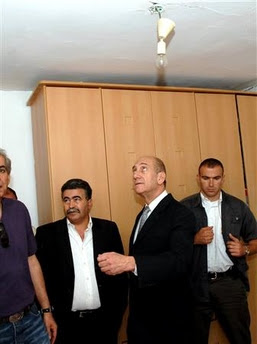 Israel's Prime Minister Ehud Olmert (C) and Defence Minister Amir Peretz (2nd L) survey a damaged house during their visit to the southern Israeli town of Sderot, in this May 17, 2007 handout picture from the Israeli Government Press Office (GPO). 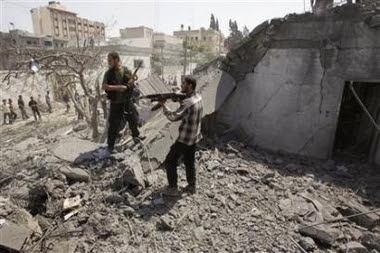 Palestinian Hamas militants stand among the rubble of a destroyed building of the Hamas Executive Force after an Israeli air strike in Gaza May 17, 2007. (Mohammed Salem/Reuters)
Posted by igm at 12:12