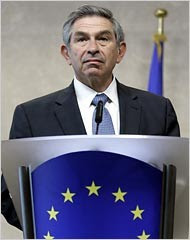 Paul Wolfowitz, one of the architects of the spurious invasion of Iraq, is now being busted for nepotism at the World Bank for awarding a plum post to his girlfriend.

Wolfowitz, along with Rumsfeld, Bolton, and other neocon luminaries, co-authored a letter in 1998 urging President Clinton to invade Iraq and eject Saddam Hussein:

The only acceptable strategy is one that eliminates the possibility that Iraq will be able to use or threaten to use weapons of mass destruction. In the near term, this means a willingness to undertake military action as diplomacy is clearly failing. In the long term, it means removing Saddam Hussein and his regime from power. That now needs to become the aim of American foreign policy.

Instead of responding to credible threats to the US and properly securing Afghanistan after successfully ejecting the Taliban, the hawkish cabal used the threat of terror as a pretext for the invasion of Iraq, stretching the American military too thinly, failing to secure either theatre, and actually increasing the number of terrorist attacks against Americans. The American dead in Iraq will soon exceed those killed in the World Trade Centre attack.

Although no ignominy fell to Wolfowitz for the Iraq debacle, he is being rebuked for impropriety at the World Bank. Hardly a proportionate or appropriate punishment, but I guess it's something. The New York Times reports today that European officials of the World Bank have offered Wolfowitz a clear and face-saving exit strategy: the US can choose his successor.

If only Wolfowitz had offered a similar exit strategy to his President.
Posted by igm at 11:03