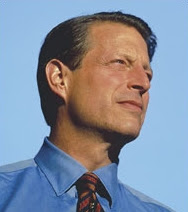 The self-described Former Next President of the United States, Al Gore, was harshly criticized after his recent Oscar victory for failing to practice what he preaches.

An organization called the Tennessee Center for Policy Research promoted the view that Gore's mansion consumes extraordinary amounts of energy, and as a consequence contributes to global warming. The Drudge Report picked up the story in February.
What the TCPR press release fails to reveal, however, is that Gore is making a concerted effort to reduce his "carbon footprint," his contribution to carbon dioxide emissions (see also this report in the Chattanoogan, and reader comments). He is reducing his consumption (for example, by using compact fluorescent lights, or CFLs), generating power (solar panels), consuming power generated from renewable sources (from the Tennessee Valley Authority's Green Power Switch program), and purchasing carbon offsets to compensate for the reduced emissions he generates.
Does his mansion consume a lot of power? Compared to the average American's abode, absolutely. Is he doing something about it? Yes. He's deliberately and consciously walking the walk; the Green Switch costs, the solar panels cost, the carbon offsets cost.
The disgusting thing about this story is how readily the media ran with it. In their gleeful unmasking of Gore's alleged hypocrisy, they instead baselessly slander him and undermine his cause—our cause—to sustainably inhabit this planet.
Do not trust the media for balanced, accurate, or truthful reporting. Parse the truth.
Posted by igm at 12:40