Zakaria on Zelaya: Opposed To This Radical Demagogue 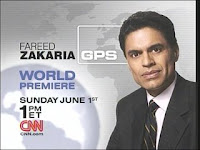 I learned a couple of things from Fareed Zakaria's rant on Manuel Zelaya's recently blocked attempt to return to his country:

You will remember Zelaya was overthrown two weeks ago today by the Honduran military. Since then, support for him has been rolling in. The Organization of American States has suspended Honduras’ membership. President Obama came out on Tuesday in favor of the democratically elected president of Honduras.

Let me register a modest dissent. While Zelaya is indeed the democratically elected leader of the nation, what he was trying to do was decidedly undemocratic. You see, the timing of the coup wasn’t random. It was to stop a referendum Zelaya had called for the next day, an illiegal referendum that would have trashed one of the eight unalterable pillars of the Honduran Constitution.

Zelaya was trying to abolish term limits to allow himself to stay in office indefinitely. The nation’s Supreme Court and Attorney General had already declared Zelaya’s plan unconstitutional, and Congress had begun impeachment proceedings. Still intent on going forward with the referendum, Zelaya was arrested on orders of the Honduran Supreme Court.

Zelaya is a radical who declared himself a socialist in 2007, and has been destroying his country’s prospects for growth. Hugo Chavez is one of his closest political allies and his role model. Indeed, Zelaya probably got the idea for his referendum from Chavez, who did the same thing in his country, as did fellow leftist Rafael Correa of Ecuador and Evo Morales of Bolivia. The difference is all of them succeeded.

So while we should support democracy, and we should be against political change by military coup, we should also be opposed to unconstitutional power grabs by radical demagogues.

What Zelaya simply wanted was the people of Honduras to have a consititutional assembly to determine their own constitution.

As the proposed assembly would meet, after the next presidential elections, he would have not been able to stand again anyway.

What is so wrong with allowing the people of Honduras to determine their own future?

Neither I, nor Fareed Zakaria, would suggest there is anything wrong with "allowing the people of Honduras to determine their own future."

If there are no limits to your time in office, you may press your advantage to win the coming election: censor the media, constrain the opposition, cow the electorate. Limits on terms remove the temptation to hijack the electoral process.

My impression is that a referendum, not a constitutional assembly, was to be used to determine whether term limits would be removed. I could be wrong on that. Got a source?