My first full day in Barcelona begins with breakfast in the flat, then taking the Metro to the Temple de la Sagrada Familia. The edifice--under construction since 1882--is as spectacular as it is audacious. I was awestruck as I walked within its soaring nave, climbed its towers, and attempted to absorb the wealth of sculpted detail throughout. The experience also nearly made me reverential. As a completed church, it may never serve its primary purpose as a place of worship, mobbed as it forever shall be by curious throngs from all over the world. That would be a terrible shame. In its conception, in every detail, it is clearly conceived as a tribute to Christ and Nature, yet it shall instead stand as a tribute to Gaudi--an eventuality that must surely cause him great anguish if he looks on in the afterlife. 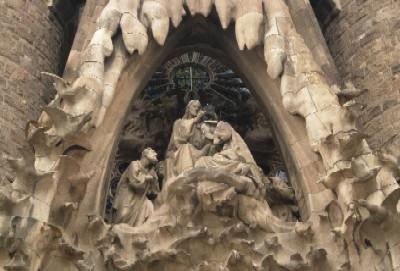 The Coronation of Mary, Nativity Facade

Visited another Gaudi masterpiece: La Pedrera or Casa Mila. I learned much about Gaudi's design principles in the museum tucked below the rooftop. I learned about Gaudi's preoccupation with parabolic forms. I learned how he incorporated this form into his designs employing an elegant solution, the inverted suspended model, depicted in photo. This is a primitive but ingenious method to model the form without aid of calculation. 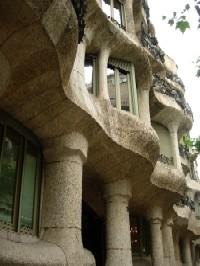 He was also thoroughly attentive to natural light in his designs, whether reforming Palau Guell or creating Casa Mila. The courtyards of La Pedrera are bound by sloped rooflines sporting porthole windows, with a geometric expansion of the 'windowprint' the deeper into the courtyard you go. In this manner, Gaudi regulates light entering flats lining the courtyard.

Again, the details here in Casa Mila are spectacular, though I confess a certain distaste for his works when trying to take them in whole. The naturalistic curves, textured surfaces and fanciful flourishes conceal an exhaustive preoccupation with design. This is a theme I find repeated throughout Gaudi's work: the meticulous design of seemingly natural forms.