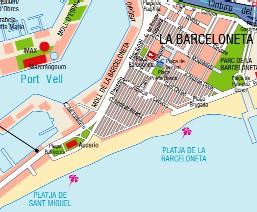 I decided to visit one of Barcelona's nude beaches, though I was too modest to follow suit. Platja de Sant Miguel lies just south of Platja de la Barceloneta. As you continue to walk along the beach, further from the warren that is Barceloneta, sunbathers shed more and more clothing til they wear nothing at all.

I discovered that nudism is decidedly unerotic, that the little swatches of fabric we usually clad ourselves with at the beach do more than cover our naughty bits--they impart fashion, modesty, and--well--neatness. They also produce eros by denying access to what they conceal. As they should.

Hm. I managed to write about the experience without once mentioning the abundance of pendulous man-sacs swaying along the beach--Ooops! 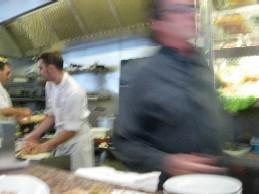 Not much time to write; things move pretty fast here. I asked Paco to keep the dishes coming: Three Canya Estrella lagers, pa amb tomaquet, sardinetas (tiny fried sardines), carxofes (artichoke hearts), tallarines (penne loaded with olive oil, butter, and garlic), gambeta blanca fregida (fried whole shrimp), and filet carne (seared beef with potatoes). Even though there were a lot of fried items, they were surprisingly light. The shrimp, sardinetas, and artichoke hearts were simply dusted in flour, salted and shown the high heat of the fryer briefly, by Pep himself (grey blur). Pep summoned his servers to clear the dishes he prepared by hissing at them. My espresso shot was presented with a tiny biscotti bite. Despite the lunch counter set-up, Cal Pep is a class act, serving a large assortment of wines, brandy, cigars, as well as delicious local dishes. 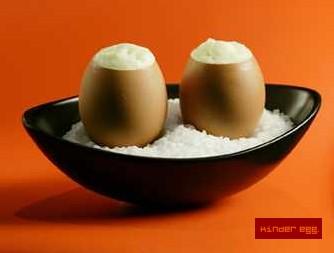 S., colleague and Barcelonaphile, arrived this evening as I arrived in Barcelona: sans valises. We celebrated his arrival by ordering the Super Festival Taster Menu, an absurd name for a delicious assortment of local dishes and playful novelties. The meal included an opening course of four amuses bouches, four middle courses, each with two to four dishes, a cheese plate (four cheeses and a fig fruit jelly), then dessert (four desserts). The food was very good, at times excellent, and the presentation ranged from elegant to fanciful. Highlights included the arroz negra with an herb aioli and adorable whole baby squid; and a chocolate ganache garnished with sea salt, extra virgin olive oil, and a bread crisp. And, of course, I must mention the kinder egg. A frothy meringue conceals the surprise: a soft boiled yolk infused with truffle (see photo). Service was sorely lacking for an establishment with food of this calibre. I frequently refilled my own glass, waited for forgotten espressos, and was generally challenged getting the attention of my server.
Posted by igm at 15:08