Suffered a bout of bulimia vi roja last night. Could've been L'Estevet's old pollo, could've been the wine. Last night's cava was from Recaredo, and the vi tinto was Domino de Tares “Cepas Viejas". I thought it might've been one of the four cheeses we sampled at ABAC. Who knows.

S. took some Gravol and suffered restlessly all night and all day today. I decided to make the best of it and visit some Modernisme landmarks. 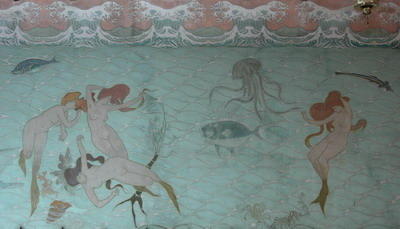 The helpful guide at Casa Amatller yesterday suggested I check out Domenech i Montaner's works. I went to the Hotel Espanya where I discovered a beautiful dining hall decorated with undersea frescoes: bipedal mermaids cavorting with colorful sea creatures beneath a towering japonais surf (photo above). 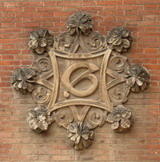 Next, after a brief stop at the flat for lunch and to check S.'s pulse, I went to the Hospital de la Santa Creu i Sant Pau, another DiM joint. His design for the Hospital, bankrolled by banker Pau Gil, incorporated his patron's fondness of French therapeutic hospital designs. The Hospital complex covers nine huge Eixample blocks. In this space, DiM created an environment that was pleasing to the eye and the spirit: a series of ornately decorated pavillions connected by underground service corridors and lined by intimate plazas and landscaped beds. The buildings were abundantly inscribed with Pau Gil's initials, so the convalescing would never forget the identity of their benefactor. The Hospital's chapel, though mostly brick and not stone, was magnificent. The crucifix was a moving tribute to His passion, and that of Domenech i Montaner. 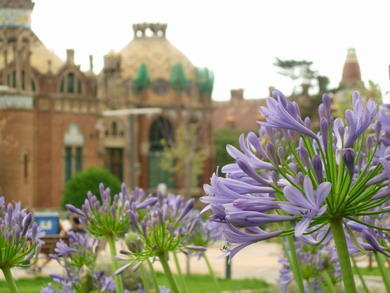 I headed to Montjuic to see Caixa Forum (by DiM) and the Mies van der Rohe pavillion. A function was being hosted at the pavillion that evening, so my access was limited. Nevertheless, the clean lines and austerity of this building were a 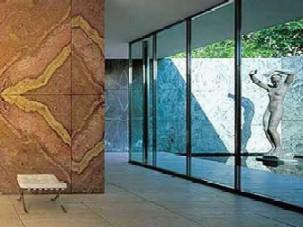 striking contrast to Modernisme ornamentation. Perhaps most striking is that the pavillion was built in 1929, within three decades of most of Barcelona's Modernisme masterpieces.

We closed the evening with unremarkable tapas at Barcelona landmark El Xampanyet. Then a walk on the beach promenade to Port Olimpic and an absurdly large seafood grill platter at Marina Moncho's. The grilled sardines were delicious. The platter also featured whitefish (the catch of the day), giant prawns, lobster prawns, mussels, squid tubes, razor clams, scallops...tasty, but too much! Go only if you want a lot of seafood and aren't too particular about its preparation.

We hung out outside the flat on Passeig del Born til about 0330h. The beer-wallahs made their rounds with perpetually cold six-packs at a euro a can. The people watching was good, especially Italian groin sandwich chick. You had to be there.