BCN3: Feasts for the Eyes and Palate

Cadafalch's Casa Amatller is open, however. The style is a kind of gothic revival, with a cobblestone entry to the inner courtyard, and gorgeous little esculpturas everywhere you look. 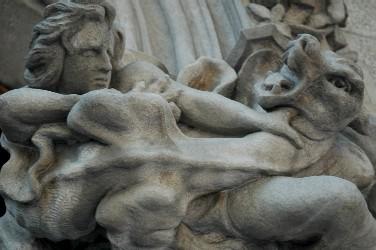 The stained glass roof of the inner courtyard is spectacular. S. and I spent much time photographing the details of the facade and courtyard. 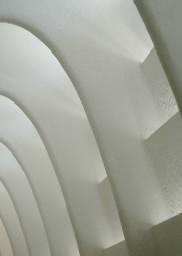 We repeated the exercise next door at Gaudi's Casa Batllo. I found the most striking feature of Casa Batllo was the attic storeroom. Gaudi ingeniously contrived to make this level both weatherproof and open air, ringing the inner courtyard with a covered arcade of whitewashed parabolic archways, and using gill-like apertures on the courtyard wall to allow air in. The play of light on these graceful lines was mesmerizing.

We headed to the University district to L'Estevet for a late lunch. Too late, I'm afraid. Many items from the menu del dia were already unavailable. S. will attest to the perils of selecting chicken just before closing time (see the upcoming BCN4: El Dia Perdido). I had the gaspatxo, breaded chicken with mushrooms, crema caramel flan, and Moritz beer. I'd go back to L'Estevet's hundred-year-old tiled walls; its ceiling plastered with bizarrely juxtaposed poster images of surfing, BMX biking, and gymnastics; its Mom and Pop feel. The restaurant is also close to some great graffiti and Barcelona's CCCB (Centre de Cultura Contemporània de Barcelona). 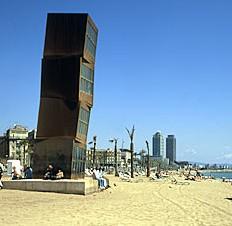 I went to the beach again, this time Platje de la Barceloneta near Rebecca Horn's sculpture, Homage to Barceloneta (see photo by Julie Woodhouse). A much younger, foxier scene at this beach. The sun was going down; in the evening's glow, everyone looked good. Time for dinner soon.

A B A C www.restaurantabac.com (empty page)
Chef: Xavier Pellicer. Abac is a gem in the renascent El Born district, about a block from our rented flat. The bright, elegant dining room is not showy in its chic. The staff here are a perfect complement to Pellicer's culinary genius: attentive, knowledgeable, and mannered. Again, a menu loaded with both invention and homage, every course on the tasting menu was strong. After amuse bouche came seven courses, a cheese plate, two desserts, and an assortment of dolci. I have to say that my favorite course was the lobster broth poured over raw verat (mackerel), roe, corn kernels, a lobster nugget, and pea-sized watermelon balls, served cold. Other highlights: seafood ravioli with butter foam; ginger chicken broth served with lettuce wrapped foie gras and caramelized pear; baby monkfish served with a salsa del mar of sweet onion, heirloom tomato, and sea asparagus. S. and I exited the restaurant at o130h, walked off the wonderful meal, and returned to the flat around 0300h.
Posted by igm at 09:01