I gave some advice to a friend recently who was having a crisis of confidence in the media:

I had read an article in Harper's a few years ago titled "The Numbing of the American Mind" that enunciated the many levels of reality, virtual reality, and flat out artifice that now coexist in our experience. Reality TV is more TV than reality, and news--depending on the media outlet--can reside more or less close to ends of a spectrum ranging from veracity to entertainment. 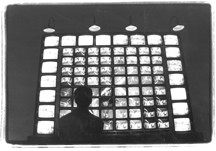 With such impressive simulacra of reality out there, it is difficult to trust even your senses. News is niche marketed.

We are left to parse out truth as a kind of probabilistic estimate based on numerous sources. Most people don't bother because the effort is too great and the rewards too meager.

I agree that it is important to be skeptical. It is the duty of a citizen to be skeptical of those who govern and inform him. But you should not allow your skepticism to be so psychically crushing that you cut yourself off from all the world, and sit moaning at your dinette, rocking back and forth and doing sudoku puzzles.

He told me about the Jewish tradition of the minyan, a communal worship with a quorum of at least ten, "making sure there were at least ten people arguing the truth together, just so that no one begins to mistake his perspective for reality."

I'll parse your truth if you parse mine.

I find it surprising that to all appearances, there are no comments to your writings.

To be critical without despair; skeptical and yet have faith.

Trust the media? Not since I was the story. There are good reasons to object to the centralization of news reporting into one or two hands. Not to mention I doubt the objectivity of all sides.

But even worse (re: the Numbing of the American Mind) is the habit of learning about history from fictionalizations. Watching shows such as the Patriot, or Gladiator, irritates me immensely. I know that the writers and director are aware of the liberties taken with the "facts," but alas, how few audience have such perspective! Lots of folks have an entertainment-skewed perception of history, and therefore of current reality.

Thank you, igm, for saying "citizen." Even the "duty of a citizen." To be a citizen is more significant than to be a consumer or a taxpayer. I pray that my students will become skeptical Christians and informed citizens.