You have no doubt by now heard that Israel's overzealous crippling of Lebanon's infrastructure has lead to a major oil spill, with an estimated 110,000 barrels of crude oil lapping at Lebanon's shores. For comparison, the Exxon Valdez spilled about 257,000 barrels of oil in 1989 (source: Exxon Valdez Oil Spill Trustee Council) 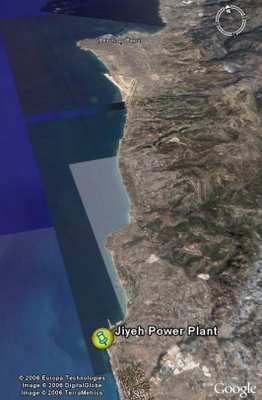 Above you can see what Ramlet el-Beida now looks like. The name of this Beirut beach translates to the White Beach.

The power plant is located 20km south of Beirut. I found it on google earth and have highlighted it for you at right. You can make out Beirut's airport and Beirut beyond that at the top of the satellite pic.

International assistance is ready and waiting, but unable to reach the affected area because of Israel's maritime and air blockade, and disruption of ground transportation infrastructure.

I agree with a lot of this, though I tend to have a little more sympathy with Israel’s plight. They made legitimate concessions in Oslo only to be torpedoed by Arafat’s small-mindedness and cowardice. In the absence of viable states with whom they can negotiate, they have made unilateral efforts toward peace; they withdrew first from southern Lebanon and next from Gaza only to have Hizbollah and Hamas turn these into missile launch sites. The radicals in Lebanon and Palestine will be satisfied only with the elimination of Israel and the moderates are too weak to stop them. What can Israel do but strike militarily, and how can those military strikes not claim the lives of civilians that Hizbollah uses as a shield. As the just war theorist Michael Walzer put it in this week’s New Republic, “when Palestinian militants launch rocket attacks from civilian areas, they are themselves to blame—and no one else is—for the civilian deaths caused by Israeli counterfire.” (see http://www.tnr.com/doc.mhtml?i=20060731&s=walzer073106)

Walzer’s point fails, though, in that Israel’s response can hardly be considered “counterfire.” As you’ve pointed out a few times, it is disproportionate by any measure. One can go further and say that direct attacks on UN and humanitarian efforts in Lebanon indicate a strategy of inflicting suffering on the civilian population in order to turn them against Hizbollah. This both barbaric and idiotically counter-productive. Israeli leaders should know by now that such aggression only fosters Arab radicalism.

I say “Israeli leaders” because many Israelis do recognize this. Gordon Levy has a fascinating opinion piece in the moderate Israeli paper Haaretz that is strongly critical of his nation’s current action—it’s much more critical than anything that can be found in a major US paper. (see http://www.haaretz.com/hasen/spages/744061.html)

And this leads me to the point where we flatly disagree: that such opinion thrives in Israel, that it is a nation openly and hotly debating its own identity and role in the world, makes it the greatest success of the region and of foreign aid generally. There is no proxy state in the world today where liberal institutions have been as successful. The answer is not for the US to pull the plug on Israel, but to produce more Israels—in Lebanon and Egypt, perhaps—and fewer Saudi Arabias and Iraqs.

More than anything, the current conflagration indicates (yet again) the sheer idiocy of Bush foreign policy: make no efforts toward peace between Israel and Palestine, cut off all dialogue with Syria and Iran and this is what you get. Team Bush has been so reluctant to get involved with a failed peace process (a la Clinton) that they have been blind to the fact that a peace process can in itself be productive in its deferral of war.

Nice essay on Camus, by the way. I just read his play Les justes a few weeks ago, by coincidence.

Best (and with notes more personal coming by e-mail)
FGM

Though not directly related to the blogs, a growing concern is the recent terrorist attacks from Canadian-, British- and American-born Arabs. In recent news a self-identified “Muslim American” opened fire on Jews in a Seattle Synagogue because he is “angry with Israel.” Terrorism is no longer isolated to the rare foreign fundamentalist because it seems to rapidly becoming "home-grown."
There are many countries who have suffered the tragic consequences of war; the Japanese did not immigrate to America and start opening fire on Americans for what happened in Nagasaki and Hiroshima, but Arabs seem to think theirs should spill into Canada, Britain and the U.S. There seems to be something inherently primitive and uncivilized about Arab Muslims no matter which part of the world they live in.

I had made the claim to a friend yesterday that Israel is not a true democracy because Israeli Arabs are not allowed to vote. He challenged me on this and I discovered that my source was faulty and that Israeli Arabs do have the right to vote. In fact, they have seats in the Knesset (Israeli legislature), are exempt from conscription, and have access to full legal protections (Wikipedia). This has renewed my interest in considering the preservation of Israel, and of its worthiness as a recipient of foreign aid as you (fgm) suggest.

The demographic shift of Israeli ethnicity created by the higher birth rate among Arabs may be the key to the preservation of Israel over the coming decades.