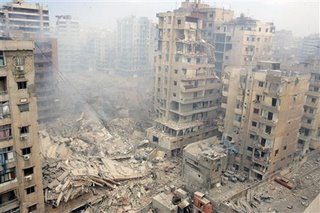 Looks like the optimism I expressed in the last post was misguided. Israel has expanded the scope of their attacks to include suspected Hezbollah strongholds in Beirut (see picture) and are preparing for a ground offensive in Southern Lebanon to occupy the area as a buffer zone.

As I noted in my last post, these territories were vacated by Barak in 2000, and Hezbollah moved in within 12 months to establish missile launch posts there. It's hard to blame Israel for wanting to re-occupy that territory. However, they demonstrate no regard for multilateralism, proportionality, or collateral damage, and that makes it hard to sympathize.

"Hizbollah’s actions, which it portrays as defending Palestinian and Lebanese interests, in fact, do neither. On the contrary, they hold an entire nation hostage, set back prospects for negotiation of a comprehensive Middle East peace."

"Israel has confirmed that its operation in Lebanon has wider and more far-reaching goals than the return of its captured soldiers, and that its aim is to end the threat posed by Hizbollah. The mission was informed that the operation is not yet approaching the achievement of this objective.

"Israel states that it has no quarrel with the Government or the people of Lebanon, and that it is taking extreme precautions to avoid harm to them. Yet, a number of its actions have hurt and killed Lebanese civilians and military personnel, and caused great damage to infrastructure. While Hizbollah’s actions are deplorable and, as I’ve said, Israel has a right to defend itself, the excessive use of force is to be condemned."