I have to confess that I have been quick to point out Israel's aggression and have been emphatic about denouncing it, while I have nearly omitted mention of Hezbollah in my posts.

Newsweek recently posted an article to their web site after Bush and Blair were caught conversing frankly within earshot of an open mic at the G8 summit this week. Michael Hirsh's commentary reprimands Bush for not re-opening dialogue with Syria, especially in light of Bush's candid acknowledgment of Syria's influence on Hezbollah: "See, the irony is that what they need to do is get Syria to get Hezbollah to stop doing this shit and it's over."

Hirsh speculates about who "they" might be, possibly Annan and the UN Security Council. He states that the Security Council "officially demanded that Syria stop its interference with Lebanon, including its support of Hizbullah." That's not exactly true. The resolution he cites, number 1559, names neither Syria nor Hezbollah. While I acknowledge that this was the intent of the resolution, the text of the resolution is not specific. This embellishment leads me to question some of Hirsh's other assertions about al-Assad's relationship with Washington, with Ahmedinejad, and with Hezbollah.

I agree that Hezbollah should be disarmed and disbanded within Lebanon. I acknowledge that the events of the last couple of weeks were instigated by reckless attacks on Israel by Hezbollah. I don't pretend to know why. I do know that Israel has injured and killed many that have no part in this conflict, and it has deliberately crippled infrastructure in Southern Lebanon. 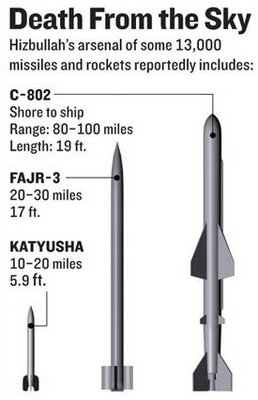 Hezbollah has a stockpile of about 13,000 missiles (according to Israeli military intelligence). The Fajr-3 missile is manufactured in Iran. The Katyusha is manufactured in Russia while the C-802 cruise missile is manfactured by China. These too are allegedly supplied by Iran. All were used in the recent attacks on Northern Israel, including a cruise missile attack on an Israeli warship.

These missile launch locations had been occupied by Israel until May 24, 2000, when Ehud Barak began a withdrawal of Israeli occupation of the area. Within 12 months, Hezbollah had reportedly erected a belt of mobile rocket launchers and truck mounted missiles.

Hezbollah is likewise responsible for reckless attacks on Israeli civilian targets in addition to military targets, though the consequent loss of life and damage to infrastructure is far lower than that incurred in Lebanon.

I think it's interesting that Bush and Blair, in their conversation, do see a way forward. Blair envisions preparing the region to accept a multinational stabilizing force, with Condoleeza Rice coming in after him to announce specifics about such an approach. Bush is not dismissive of Annan's role, but seems to view Annan as a useful conduit to Damascus to discreetly persuade al-Assad to use his influence on Hezbollah. Perhaps Hezbollah is even acting on directives from Syria, as implied in Bush's remarks. Iran is certainly not mentioned.

Hopefully, Lebanon can regain her footing after the recent attacks, and will receive assistance to put its heavily damaged infrastrutcture right again. I am guardedly optimistic that a de-escalation will be achieved.