Zinedine Zidane closed his illustrious career in high drama yesterday. The French midfielder and captain who dominated the elimination round of this year's World Cup was sent off after head-butting the Italian player Materazzi in the waning minutes of extra time in yesterday's final. 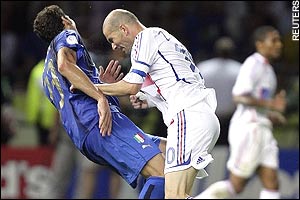 At 110 minutes, with only 10 minutes remaining in extra time and the teams deadlocked at 1-1, Zidane turned to Materazzi and drove his head into the Italian's chest, dropping him to the pitch. At first, play was going to continue as the referee hadn't seen the infraction. While officials are not allowed to make video-assisted rulings, the incident was replayed in the stadium possibly forming the basis for the fourth official's confirmation of the attack and Zidane's red card.

Zizou left his team in the lurch with Vieira, Ribery, and Henry already subbed out. Zidane is his team's place kick specialist, scoring earlier in the game on a penalty kick for a foul awarded to Malouda, and scoring another penalty kick goal to eliminate Portugal. It was his free kick cross to Henry that eliminated Brazil. Only a couple of minutes before his dismissal, Zidane powered an impressive header at the Italian net that Buffon only narrowly directed to safety. Instead of leading his team into the penalty shootout, he left them short-handed with minutes to go.

One British tabloid noted Materazzi could be "clearly seen twisting the Frenchman's nipple," and he allegedly followed that up by calling him a terrorist. Who knows. All I know is while Zidane may explain what he did, he can't excuse it. Materazzi's actions, whatever they were, were calculated to bounce Zidane from the game, and Zidane stupidly, selfishly cooperated.

By this time, the voting for the tournament's MVP had closed. Zidane was awarded the Golden Ball while he sulked ignominiously in his locker room.

oh goodness -- he still got the award? Ha! Yah, I agree that an explanation is nice but doesn't let him off the hook. When one is at the World Cup, one is expected to know better and have some discipline. Oh, wait -- these are celebrity athletes. NM.